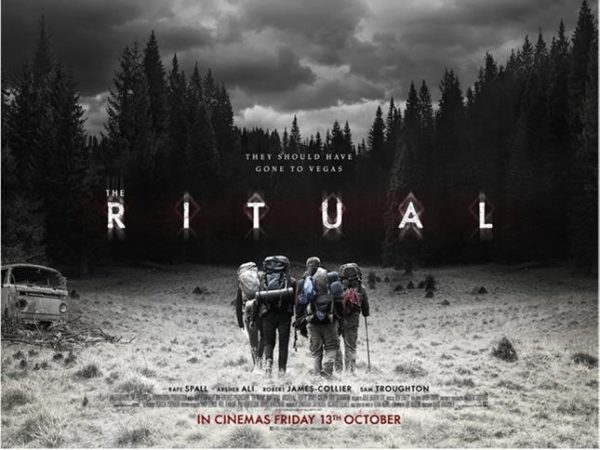 A Friday night out with our Editor usually comprises of endless pints of fizzy lager, copious amounts of pork scratchings and politically incorrect remarks about the new barmaid before everyone goes home waking up the following morning with a hideous hangover except for the Editor who has been detained overnight by the local constabulary.  Director David Bruckner’s new film, ‘The Ritual’ starts off in a similar vein with five friends out on the ale before the night ends tragically leaving the four remaining friends to reunite some months later for a hiking trip deep in the Scandanavian wilderness. But as the old children’s song goes, ‘If you go down to the woods today, you’re sure of a big surprise’.  And what a surprise it is as they find themselves lost in the forest and worse still there’s something  unseen that’s coming after them.

This is the directing debut of writer/ directer David Bruckner who previously has directed a chapter of horror anthology VHS and for an American he assembles a convincingly British boys Friday night at the pub with plenty of amusing and very funny banter which accentuates the tragic death of one of them later that night.

The film goes from extreme to the other as their cosy night in the pub is exchanged for a bleak cold mountain top hike which here is shot in the suitably bleak Carpathian mountains range. It’s when one of them suggests that with the night drawing in and one of them with a twisted ankle they should take the ‘short cut’ that you know this is not going to end well.

There’s something a bit Blair Witch about their trek through what quickly becomes a dense forest where it takes a sinister turn when they come across an eviscerated animal carcass half way up a tree. With the night upon them they take shelter in a deserted log cabin, and understandably deserted when a night of terror leaves them all shaken not knowing what has happened or why they have done certain things all they do know is that someone or something is out there in the forest and they need to get out of it before night sets in again.

This is all extremely well orchestrated with the forest suitably claustrophobic and something glimpsed but never fully seen and its only in the third act when it all becomes clear what’s going on and as this has been produced by Andy Serkis and his Imaginarium studio it’s clear that motion capture is going to raise its head somewhere along the line.

All this is well handled by Bruckner and the banter and increasingly bitter recriminations between the group is all convincingly played out and Rafe Spall grounds it in his first proper lead role in a horror film. What’s less convincing are some of the character traits which do seem to fall into stereotypes for the genre – so you have the whining fat boy, the Everyman, the well meaning peacemaker and in this film, the underwritten ethnic role.

Despite its weak ending this is an atmospheric and at times creepy horror film which bodes well for future films from Bruckner.