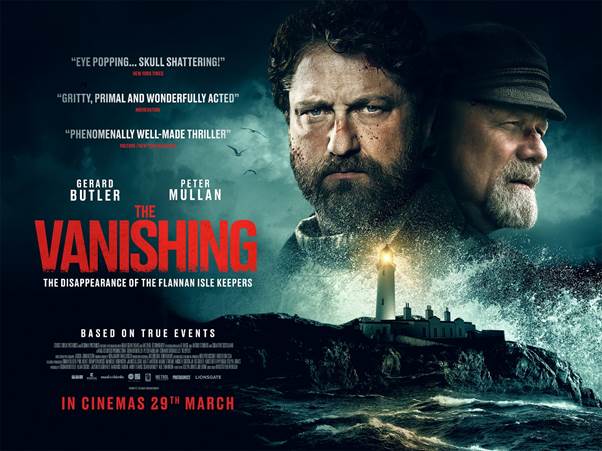 Much like the TV career of Vernon Kay and the credibility of rapper Snoop Dogg after recording a song with Olly Murs the three men who managed the Flannan Isle lighthouse in 1900 simply disappeared and The Vanishing recounts the tale.

Tom, James & Donald are the three lighthouse keepers in question each saying farewell to their family on the mainland before they set off to work their shift on Flannan Isle off the coast of Scotland and like the actors who play them represent the decades of everyman. Tom is a widower played by Peter Mullan and is old school whose seen it all before and to whom the others defer to, James is the family man and the established star here as played by Gerard Butler, a safe and experienced pair of hands and Donald is the young single man played by Connnor Swindells and is the rising star learning his craft before he goes on to greater things. So it’s in this pecking order that the hierachy runs once they arrive to start their stint on the island. It’s only when they find a man collapsed at the bottom of a cliff face that things start to change especially when they recover a wooden chest nearby. It’s Tom who enacts an early version of Deal or No Deal telling the others not to open the box but inevitably they do and what they find inside triggers a series of events that leads to others looking for the box also.

It’s a satisfying first two acts which atmospheric and intriguing 3 hander script which could be played out just as easily on stage as on film. But it’s the third act where it loses pace, the tension subsides even as the relationship between the three starts to implode when the isolation and the thought of what they’ve done and how they might get away with the contents of the box without drawing attention to themselves takes its toll.

It’s a shame because this is based on a true story where the men were never been found which raises the question as to how any of this is known or is it merely conjecture on the part of writers Joe Bone & Celyn Jones. Originally called Keepers it’s been re-titled presumably to avoid confusion with anyone thinking it might be about bees or wickets and The Vanishing sounds a bit more sexy though nowhere near as good as the superb Dutch thriller of the same name that was remade disastrously in Hollywood. Unfortunately what is an intriguing premise has been made into a somewhat drab and overlong thriller.