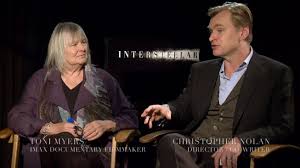 If you’ve never seen a film in IMAX then you’re missing out on a great experience especially if its in 3D. Screens are huge especially the one at Waterloo in London which is the biggest in the country and is a totally immersive experience. If you’ve only seen a feature film like ‘The Force Awakens’ in IMAX this way then give some of their documentaries a try. A new one coming out soon is ‘A Beautiful Planet’ directed by Toni Myers whose films have a been a source of inspiration to Christopher Nolan when he was making ‘Interstellar’. Nolan is a fan of IMAX and has also shot many scenes for some of his films in the format too.

Toni Myers was born and raised in Toronto, Canada and is a veteran IMAX® filmmaker, credited in more than 18 IMAX films spanning a multi-faceted career of over 40 years. She was editor and writer of IMAX’s groundbreaking space trilogy: THE DREAM IS ALIVE, BLUE PLANET, and DESTINY IN SPACE.

With the advent of IMAX®3D, Myers wrote, edited, and co-produced the award-winning DEEP SEA3D, and UNDER THE SEA3D.  She was Producer/Director/Writer/Editor of SPACE STATION3D, and HUBBLE3D, each awarded Best Film by the Giant Screen Cinema Association, and among the most successful IMAX documentaries ever made.

Myers has enjoyed a long and productive association with NASA as a key member of the IMAX team that has trained 145 astronauts and cosmonauts in IMAX film making for 24 missions flown over 25 years. She has worked closely with the Jet Propulsion Laboratory, the Space Telescope Science Institute, and the National Center for Supercomputing Applications at the University of Illinois, marrying data from space-based observatories with pioneering computer techniques to allow audiences of all ages to explore the wonders of the cosmos in IMAX. To date, over 100 million people have seen IMAX space films worldwide.

In addition to her work with IMAX, Myers has many television drama and feature films to her credit, including pioneering music films with John Lennon and Yoko Ono, and Santana. Her music skills were later utilized as Associate Producer and Supervising Editor on the IMAX film ROLLING STONES AT THE MAX.

‘A Beautiful Planet’ has some great sequences especially one where the astronauts go out side the space station and overshadows anything you see in the oscar winning, ‘Gravity’.