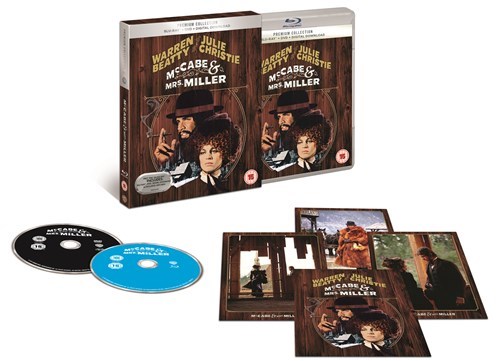 The late Robert Altman had had an extensive carer in TV before making his first film in 1967. But his  breakout film was 1970’s ‘MASH’, a film set in a mobile military hospital during the Korean war which balanced humour with the horrors of war but caused the studio a huge amount of concern. Altman was pioneering in his use of overlapping dialogue arguing that that was how real life was. In his early films especially people spoke over one another whilst background conversation went on. It caused sound editors nightmares but his work in that area was revolutionary and it was something that he carried on with his first dabble into the western genre with 1971’s McCabe & Mrs Miller.

Based on the novel by Edmund Naughton it followed an opportunist gambler played by Warren  Beatty who sets up a brothel in a remote mining town and goes into partnership with a Madame played by Julie Christie to run their bordello. All goes well for them and business booms until a large and ruthless corporation decide they want to buy into his business.

Altman shot his film in Vancouver getting his production designer to build the town from scratch and the production employed locals to construct the town. They were then employed as extras to appear in the background as they went about the building work.  It was one of only eight films that Leon Erickson as production designer would work on in such a capacity and it would be photographed by the legendary cinematographer Vilmos Zsigmond and was the first notable film that he had photographed and he would go on to work on Deliverance, Close Encounters of the Third Kind and the infamous and studio bankrupting ‘Heaven’s Gate’.

With McCabe and Mrs Miller Altman made what was regarded as one of the top ten best westerns ever and continued his interest in experimental sound with people talking over each other and glimpses of conversation being overheard to set the environment of various scenes.

McCabe & Mrs Miller is another in the Warner’s premiere collation and it’s another brilliantly transferred film. A little thin on extras but apart from the ‘making of’ which only gives a brief behind the scenes look from a featurette made at the time of the film’s release the disc also has a trailer but best of all is the commentary by Robert Altman though for some reason it’s only on the dvd rather than the blu ray. Altman is an interesting raconteur discussing with producer David Foster some fascinating insights into the process behind the making of the film. The disc also includes 4 lobby postcards of scenes from the film.

Deliberately paced this builds towards a climatic showdown set during a heavy snow storm which Beatty was reluctant to shoot as he was worried about continuity problems. In the end Altman went ahead anyway and it took 9 days to shoot the scenes but the snow fall didn’t let them down and its all beautifully shot.

If westerns are your thing then McCabe & Mrs Miller is a must and earned Julie Christie an Oscar nomination (losing out to Jane Fonda in ‘Klute’). Altman’s back catalogue was eclectic to say the least  (he later went on to direct the Robin Williams misfire, a live action version of ‘Popeye’) but this was one of three great films he directed in the 70s (MASH & Nashville being the other two) and for completists  this is a must.