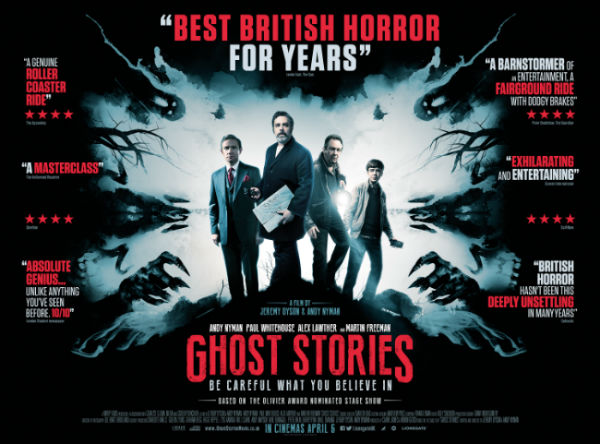 Good ghost stories always scared people and we’ve always thought that at the end of TV’s ‘Crimewatch’ the presenter should always  end it with ‘….and remember please don’t have nightmares or let tonight’s programme frighten you because….ARRRGGGGHH!!! HE’S BEHIND YOU!’ ………. but we digress.

Ghost Stories started life as a West End play co-written by Andy Nyman & Jeremy Dyson each respectively behind Derren Brown’s TV shows and The League of Gentlemen’s horror tinged comedies.  Both are obsessive horror fans especially that early 70’s staple, the portmanteau film. The Amicus studio were direct rivals to Hammer and they would string together several individual stories with a central narrator and these films usually starred well known and eclectic casts that included  Joan Collins (Tales from the Crypt) , Jack Palance & Burgess Meredith (Torture Garden), Britt Eckland & Herbert Lom (Asylum) and even Terry Thomas & Tom Baker (The Vault of Horror).

Nyman stars as Professor Phillip Goodman who has his own TV show dedicated to exposing supernatural shysters and here it differs from its stage play which originally had the Professor giving a lecture but for the film has him uncovering fraudulent psychic’s during their stage shows. It’s not dissimilar to a real TV show that Nyman produced for Derren Brown revealing the tricks of fake psychics preying on the recently bereaved and vulnerable. After his latest reveal the Professor receives a letter from the aging Charles Corman, another debunker of the supernatural, who spiked Goodman’s interest as a boy. Having disappeared from public life and thought to be dead Goodman can’t resist the invitation and visits him at a desolate caravan park where Corman, who is on his deathbed, tells him of three cases which he had been unable to prove or debunk and tasks Goodman to prove the stories either way.

Those three tasks form the stories of the film. The first is of a security guard (Paul Whitehouse) of a derelict hospital, the second is a young man reduced to a gibbering wreck by an incident in a forest when his car breaks down and the third of an arrogant business man (Martin Freeman) alone in his huge plush house awaiting the birth of his first born child. These are all pretty standard horror tropes and the stories are thin to the point of being almost inconsequential but Nyman and Dyson who also co-direct have constructed some very creepy sequences particularly in the night watchmen story taking the classic ‘don’t go off on your own in a dark place’ when the guard…. well,  goes off on his own in a dark place to investigate a sound.

But the pair have loaded their film with an immense amount of detail littering just about every single frame with a level of detail and visual motif’s  that may not be obvious as to their relevance at first and makes the film eminently rewatchable. Their love of film, and horror especially, means the film is loaded with influences and references from The Shining and The Evil Dead and even Jurassic Park (‘Life finds a way’) and the film has clearly been a labour of love for both of them.

The casting of Martin Freeman & especially Paul Whitehouse known more for their comedy roles works well here and Alex Lawther is especially good in a role shot mostly in close up where his jittery nerve shredded character must have been exhausting to perform.

Fans of Amicus portmanteau films will find much to enjoy here and the duo’s use of a number of both cinematic as well as theatrical techniques is impressive. Ghost Stories is creepy rather than outright scary and demands more concentration as the film draws to its climax so than the run of the mill Hollywood horror flick. With a sense of unease throughout Ghost Stories is a Brit film that’s well worth a watch and rewards repeated viewing.