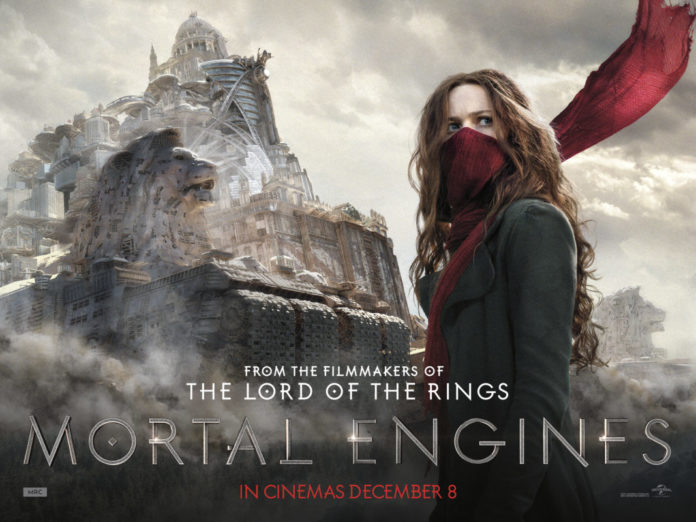 With the Brexit balls up continuing to be a chaotic shambles Mortal Engines with its massive metropolis trundling around the world on wheels gobbling up smaller city’s seems oddly appropriate  with Europe seemingly desperate to hold on to the UK and willing to punish if we go.  It’s these monumental travelling mass movers that are the most impressive things about this adaptation of Philip Reeve’s book in what is another teen franchise set in a dystopian future much along the lines of The Maze Runner.

With the world having been devastated in some unspecified apocalypse the world’s cities have  somehow put themselves on wheels and trundled around the world looking for smaller towns on wheels to gobble up, enslave  the population and mash up the city’s remains to use as fuel to run their engines. And this is how the film opens with the gigantic metropolis of London so big that St Paul’s Cathedral is perched on top chasing a smaller city which it devours. With Hugo Weaving as a military mad boss Thaddeus Valentine you know he’s up to no good which is confirmed when Hester Shaw (Hera Hilmar), sporting a scar that seems to fade as the film goes on, attempts to murder him which is only prevented when Tom (Robert Sheehan) intervenes only to be chased through the travelling tank with both of them being thrown off it by Valentine.

It’s this scar that’s the key to Hester’s murderous inclination towards Valentine and its all part of her back story which frequently intersperses the film and it’s all to do with her Mum and a vital artifact that she gave to Hester and she is the only character in the film with any story or story arc.  Sheehan as Tom is a sort of archaeologist of old world tech who rifles through the captured city’s old technology looking for anything of value, a sort of cash convertor of crap and he plays a sidekick to Hester who find themselves chased by a seemingly unstoppable robot also with murderous intent towards Hester monosyllabically rasping ‘Hester!!!’ as he stomps after her.  His Terminator like appearance and intent is just one of many influences the film wears all to obviously with Mad Max being one and the Star Wars films being another.

Co-written by Peter Jackson , Fran Walsh & Philippa Boyens this is another epic with grandiose ideas and the first half is impressive enough none more so than the visual impact of these huge rolling city scapes rumbling round the world with Valentine looking to break through an enormous wall to enter another part of the globe in his endeavour to gobble up more cities and frankly take over the world and in that desire he comes across like an even more insane Putin or egotistical European ambassador. It’s Hester who is the key to preventing Valentine’s plan and teams up with the improbably named Anna Fang (Jihae) who looks like the result of a one night stand between Elvis Presley and Yoko Ono and the film builds towards a David & Goliath face off.

Directed by debut director Christian Rivers a regular collaborator with Jackson and has won an Oscar for his visual effects on his 2005 version of King Kong. The first half is engaging enough with an unexpectedly good joke about, of all things, the Minions. But the latter half soon becomes that generic and formulaic teen franchise

Mortal Engines does look good with a steampunk ethos but with a cast that includes Colin Salmon who appears in yet another role that is a waste of his talent this ultimately promises more than it delivers.