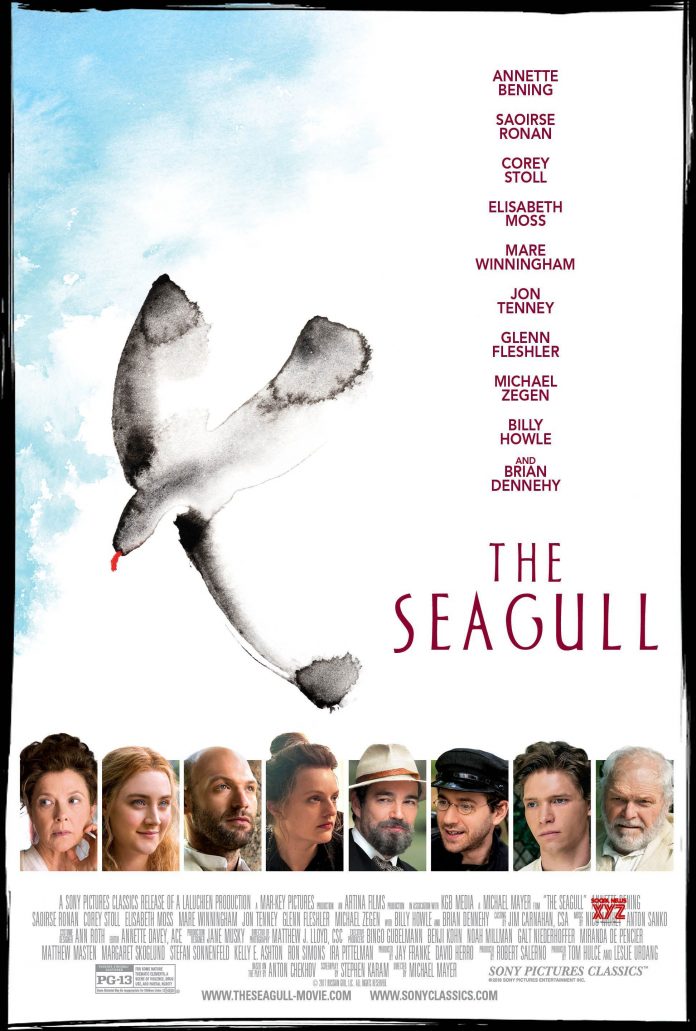 Instead we have a bit of high brow adaptation of the classic Anton Chekhov play, The Seagull. Now we’re no snobs but when you see the producers are named Bingo, Benji & Noah there’s sense that this may be a film more suited to children with ADHT….or Americans.  But in fairness to Mary, Mungo & midge or whatever the producers names are they have got a great cast here including Saoirse Ronan (and no we still don’t know how to pronounce her name), Annette Bening (who’s starting to look like an 80 year old Katherine Hepburn) , Brian Dennehy & Mare Winningham who we last remember seeing in 80’s brat pack films.

Directed by Michael Mayer who our director insists was the hockey masked villain in Halloween until we told him that was Michael Myers this chops the plot around and is book- ended by the same scene.

Set in the early 20th century it has Bening as Irina accompanied with her lover to visit her dying brother (Dennehy) on his servant tended estate.  Into the mix are their grown up children one of which insists on performing a little play to cheer up his dying uncle and has a little hissy fit when the family aren’t as attentive as he feels they should be for what ultimately looks like a pretentious sixth formers play. It all plays as a back ground to subterfuge of friends, lovers and unrequited love between the wrong people and is unsparing in its depiction of the narcissstic lovers and as might be expected it all gets a little angst ridden about the human condition.

Adapted by Stephen Karam its rightly truncatted  to 108minutes for modern audiences and retains  much of the original dialogue albeit it some open to parody such as when one characcter asks, ‘Why do you wear black?” to which the reply is, ‘Because I’m in mourning’ although perhaps more succinctly one character says ‘ Nothing happens in your play. It’s all talk!’ and anyone who’s had to study the Seagull for their A levels will surely let out an appreciative cheer.

This is a perfectly respectable attempt at filming the play though quite whether there’s a modern day  audience for Chekhov is questionable and this is likely to be destined for those A level classes where the  teacher puts a dvd on for the class and sneaks off for a crafty cigarette and illicit liaison with the Physics teacher she’s been having an affair with and is the worst kept secret in the school.

Here’s the trailer for The Seagull…….