So whilst the US has the mighty Disney and Pixar (Coco) , the UK has Aardman (Early Man) animations and France has Imagination (Despicable Me 3) Spain has Lightbox Animation studios and they are behind the kids animation ‘ Tad the Lost Explorer and the Secret of King Midas’  a child friendly Indiana Jones rip off that fills the space until Indy 5 starts filming next year.

It follows the same template opening with an underwater action sequence that sees the star archaeologist Sara Lavrof rescue a manuscript deep under the ocean belonging to Midas. It’s a guide to finding three parts of an amulet that, once put together, gives the keeper the power of Midas to turn everything into gold a power a power which must have caused no end of inconvenience to him when using the urinal in the men’s toilets. Of course not all goes well and so we have the pantomime villain Jack Rackham whose after the map also and steals it from a presentation Sara’s giving. Having kidnapped her to help him find the pieces of the amulet it’s cue our hero and love interest Tad, a construction worker and lovelorn adventurer besotted with Sara. Inevitably he rescues her and they embark on their own quest to find the pieces before Rackham.

If you’re unfamiliar with the first film then it’s a little disconcerting hearing Tad proclaiming his love for Sara as  his name sounds a little too close to Dad and initially it all seems a little incestuous when it appears that he’s lusting after a character that might be his daughter. He’s joined by a zombie like mummy / skeleton  called  Paititi who just rocks up at  Tad’s flat and forcibly joins in with the quest to find Sara. He is the alleged comedy sidekick but regrettably turns out to be the Jar Jar Binks of the film, a screeching squawking irritant that has you reaching for the ear plugs with his incessant and inane,  ‘look at me, look at me!’ behaviour that must have seemed a lot funnier in the voiceover booth than the onscreen incarnation we have here.

The film also suffers from too many characters because added to this are two animals: a placard wielding parrot and a soppy dog along with Tiffany, Sara’s friend, who’s there primarily for a plot pivot point and little else. 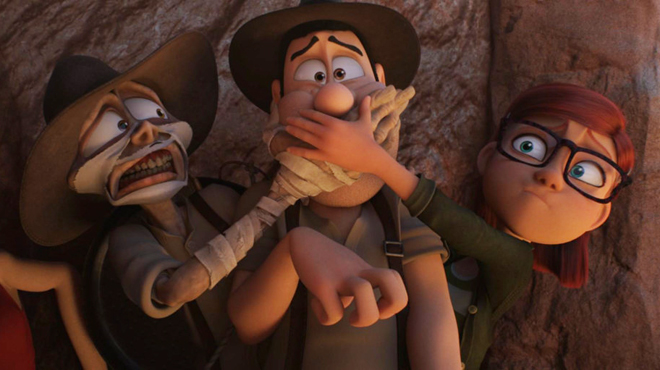 With four screenwriters they have taken the Indy template and animated it with some frenetic set pieces that are fitfully exciting and would work well as live action also, but as this has a 3D version would be immersive enough for younger children to enjoy. Thankfully though the 3D -isation of animated films seems to be very much on the wane now.

With Pixar having set the benchmark for animation feature films Tad struggles to get anywhere near that level and there’s no sly jokes here for adults to enjoy but at 85 minutes it doesn’t outstay its welcome unlike the skeleton who you can’t help wish the dog would once and for all make a meal. Unfortunately much like the lounge version of Tutti Frutti in Spanish which ends the film this is a pale imitation of Indiana Jones.