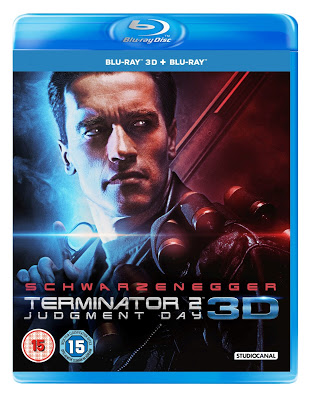 In terms of sequels never being as good as the original Terminator 2 is an exception (Director James Cameron had already added to the list of superior sequels with Aliens). With state of the art special effects which were literally jaw dropping for audiences seeing the film for the first time in 1991 Cameron took the sequel to another level with action sequences which, even 27 years later, stand the test of time and the film could easily have come out this year  (and would have been far better than some of this summer’s blockbusters). None of the sequels have lived up to the standard of the seond film and thankfully Cameron is back on board with Terminator 6 which starts filming in 2018.

Much like Titanic which Cameron converted to 3D he’s done the same here with Terminator 2 whilst he had the time before he started work on the next bunch of Avatar sequels which he’s shooting back to back.

Having originally hit British screens in 1991, complete with groundbreaking special effects, this became Arnold Schwarzenegger’s (Total Recall, Predator) most iconic role to date, as well as one of the most quotable scripts of the decade.

It has been 10 years since the events of Terminator. Sarah Connor’s (Linda Hamilton – The Terminator, Dante’s Peak) ordeal is only just beginning as she struggles to protect her son John (Edward Furlong – American History X, Pecker), the future leader of the human resistance against the machines, from a new Terminator (Robert Patrick – Walk the Line, ‘The X Files’), sent back in time to eliminate John Connor while he’s still a child. Sarah and John don’t have to face this terrifying threat alone however. The human resistance have managed to send them an ally, a warrior from the future ordered to protect John Connor at any cost.

With the film now available on blu ray in 3D  and also on dvd and 4K UHD too for the first time here’s 10 facts you might not know about Terminator 2…….

The new 3D disc has a whole bunch of great extras on it including:

Here’s a glimpse at the featurette on the disc……