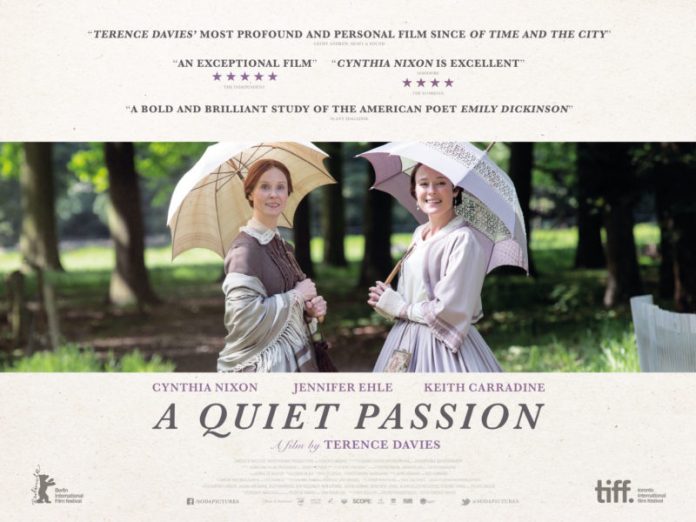 Over the years we’ve had a number of films about writers including ‘The Lady in the Van’ – Alan Bennett,  ‘Shadowlands’ – C.S. Lewis, and  ‘Shakespeare in Love’ – um…..um…… no, got me on that one.  ‘A Quiet Passion’ is about a far more obscure and low profile 19th century poet Emily Dickinson and though little heard of in her lifetime her sad and on occasion melancholy poems are a far world from the Editors unedifying knowledge of filthy limericks (‘A beautiful spy from Bologne, Hid a small bomb in her groin, One night after supper , whilst the colonel was………..’ —‘STOP! STOP! PLEASE STOP!’ – AGF writers).

The writer-director Terence Davies is a big fan, not of the Editors filthy limericks, but of Dickinson and has written  a sincere film about the poet, played here by Cynthia Dixon who is also a fan of her work and bears an uncanny resemblance to the poet also.

From the very start Dickinson, where we see her as a pupil at a devout and evangelical church boarding school, is a fiercely single minded and independent schoolgirl when she goes against the religious direction of the head teacher and returns home to stay with her parents and siblings some of who are almost as single minded as she is though all are respectful of their father and accede to his wishes. It’s moments like this where it’s made clear how different modern children are towards their track suit wearing parents, who, between stuffing pizza in their face at every meal, scream at their kids only for the kids to swear obscene abuse back at them. Frankly it’s like visiting the Editor’s house (You’re fired!- Ed).

As she gets older Dickinson befriends an equally forthright socialite, Ms Vryling Buffam, and is influenced by her outspokenness only to be let down when she sees her give up her independence for marriage. Dickinson is not without yearning for this life too but it is towards a married Reverend and it’s a relationship that can never be furthered in such society and it’s with a degree of hypocrisy that when she finds some intimate fumblings going on in her house after the death of father that she berates both parties. Dickinson’s life as portrayed here is one of disappointment with her never finding love, her work never finding the audience it deserved when she was alive and  eventually succumbing to an incurable disease.

This is a typically Terence Davies film, a literate script perhaps overly so with its use of eloquent language which conceals some brutally savage insults as highlighted in a great scene early on when a pompous Aunt visits intent on establishing herself as top matriarch only to find Dickinson and her siblings politely verbally tear her apart and its one of the delights of the film. There are moments though where the flowery language and social etiquette, though clearly of its time, is a little too reminiscent of TV’s ‘Blackadder II’ but don’t let that detract from the film. This is a beautifully shot and meticulously framed story of an unconventional life in a conventional era.