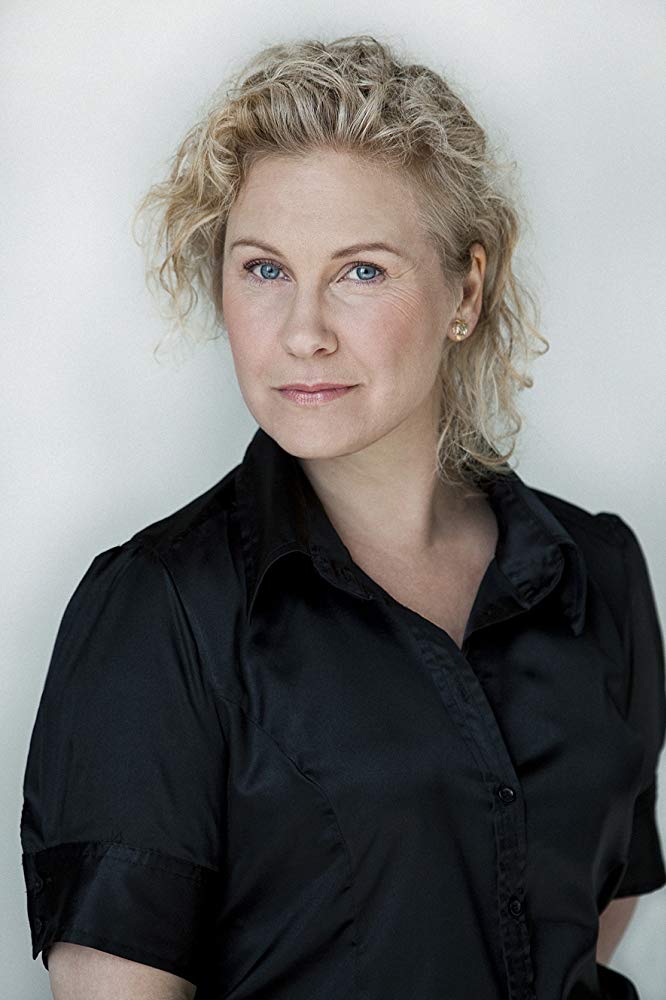 Having watched ‘Border’ (reviewed here) a film about Tina, a customs officer who can smell fear and literally sniffs out those incoming passengers who are up to no good, it’s difficult to know what to expect when we waited in a boutique hotel in London to meet respected Swedish actress Eva Melander. It’s for no other reason than as Tina she has gained a huge amount of weight and wears heavy prosthetic make up (Oscar nominated) where her character indulges in a spot of maggot munching amongst other things. Mercifully in real life she’s a world away from her appearance having lost the weight she is almost typically Swedish; blonde, svelte and friendly. We sat down and discussed the challenge of all of this in Border a film which is unlike anything else you’re likely to see this year.

Any Good Films: You’re well established as an actress so do you have to still audition for this?

Eva Melander; Oh yes I mean this is such a special part to create. Ali was casting this for about one and a half years and he was also trying inexperienced people because he was looking for people who actually looked like what he had in his vision for those two characters when he knew this was quite a heavy acting piece so he was lucky to find me and Eero (Milonoff , her male co-star) to transform ourselves into becoming this, you know, gaining 18 kilos and undergoing 4 hours of prosthetics. So yes I had one casting then I got called back for Ali with Eero. AGF: But this role is so out of the ordinary how do you audition for something like this?

Eva Melander; I hadn’t read the short stories before I read the books but I started to read pieces of the manuscript that I could read and preparing myself in that though there was animalistic in this you know. There were some scenes that were more extreme you know in the way of having this intense feelings and have these more animal like feelings. I was pushing myself in that direction and there was a really good casting director too who I felt really comfortable with her and I’d been for a casting with her before so we knew each other in a good way. And being a stage actor and doing workshops like that with a brilliant voice coach here in London. All those years of doing workshops and putting myself in different positions and learning to cross borders and I found that in this piece there were earlier acting experiences that I could use

AGF: Did you have any input into the prosthetics design you wear in the film?

Eva Melander: Well when we tried out the mask the designer and Ali had their process. We had two try outs and we had to find out how it connected on my face and how I could use it and what was good for the character. I was practising and doing it together with them. From my point of view it was more technical so that I could see what are the actual possibilities with it. The designer has done an incredible job translating alI. Ali’s vision into this work an there had to be a possibility that it could be someone who could pass as a human so that was their challenge. AGF: You put on a whole load of weight for this role which must be quite easy but how difficult was it to lose it all?

Eva Melander: Well I felt kind of happy to have a reason to explore this, I felt really happy to have the opportunity to do it. But actually gaining the weight was a lot easier to do than lose it. For me it wasn’t a big issue really because I was just determined to do this part. I’m kind of lending myself out to do this character. I never felt it was hard because I’m changing my body and I’m a female actress. I’ve always looked on it as it’s my job and its going to be exciting to create this character.

AGF: But why not wear padding rather than do this to your body?

Eva Melander; Yes but we had some naked scenes when we’re swimming and this sex scene. I just knew it wouldn’t be so good if it wasn’t the real body. When I was reading the part I just felt that Tina would be more strong and solid in her body. She has to weigh more she’s more heavy than I am. If I believe in something then I’m happy to just go.

AGF: This is a challenging role for other reasons too. At one point you’re eating maggots. I can imagine that must have been a one take scene

Eva Melander; No I did it a few times. I learnt something in acting school one of the teachers, ‘You you have to learn to tell you’re bloody personality to stand away from the character’. You see what I mean so after shooting this film I was swimming in a lake up North in my summer house in Sweden and worried about the branch overhead or the ground under my feet and I thought, ‘This is just so ridiculous!’ but when I was doing this I was not afraid of anything so it’s kind of the way the character carries you in some way. It’s not dangerous those worms that we were eating, they are hygienically bought up in place for eating but I didn’t eat them for real I didn’t chew them and swallow. There was one worm that was placed in front of me and I could tell that one was definitely bigger and from the forest and I just felt it would be a bummer not to go for it and give some material to the Editor and I just took it and pretended to chew. I wasn’t afraid of those things because I know it’s not dangerous and I didn’t kill any animals but there are so many things that aren’t pleasant or dangerous and then you think, ‘Is it worth it or not’? But this is not dangerous, it’s just having a worm in your mouth for a moment and then you spit it out. It could be our future you know getting our protein from insects. I just put it in my mouth and pretend I wasn’t eating it for real. I didn’t kill it in my mouth and swallow it.

AGF: So you’ve put on all this weight, you’re putting worms in your mouth and then there’s the nudity

Eva Melander: But its Tina not me. To be honest if I feel like I’m in safe hands I’m not so worried. I’ve been naked with males and females in the Summer since I was a kid. If I was alone doing this not in character I would feel different but for me I can’t look at this charter and say, ‘This is me!’ If I asked you what harm could it do What harm is there can you see, in doing it? What problem could that cause ?

AGF: Well I think that’s probably a British hang up

Eva Melander: Maybe. I would feel terrible if I did a film with bad acting and all clothes on that would be harder to me to know that its out and people would see it than doing a job that I’m satisfied with but without clothes. So maybe it is a British thing I don’t know. It wasn’t a problem for me. A problem was swimming in the 8 degrees lake pretending it was 20 degrees than being naked. I think it’s beautiful that you show a body like Tina’s on a big screen. Personally I think that’s beautiful, that’s healthy rather than all those adverts which give people eating disorders, you see what I mean, that’s not healthy. Looking at Tina running happily naked in the forest for me you know that couldn’t be a problem.

AGF: Ali Abbasi, the director, has said that you are meticulous whereas Eero was more impulsive but that you absorbed each others attitude to the roles. Do you think that’s true?

Eva Melander: Well I would say that if you compare us to each other you would say I’m more precise and he’s more impulsive. What we have in common is that we’re very determined, its 100% forward and not pushing back and not feeling embarrassed to do anything which makes it good together. You can’t do a piece of acting so precise you have to be open to impulses otherwise you have nothing. Being precise for me is a way of orientating but when you’re in the moment you have to be open.

Eva Melander: Well I’d love to come to England. I’ve always found that you have really great actors but you never know what’s going to happen and I would love to work in English.

AGF : well the reason I ask is that you have someone like Noomi Rapace who went there and has done very well.

Eva Melander: Noomi got an offer from Hollywood

AGF: …..but that was off the back of The Girl with the Dragon Tattoo

Eva Melander: Absolutely but it’s because an American director saw her but it would be most welcome yes as much as I would say yes to come here. She was working at the National Stage in Stockholm as I have and she was doing all sorts of things and then she did this movie. You just never know.

Eva Melander: I’m going to shoot the second series of a series in Sweden. It’s a Nordic crime series shot in the North of Sweden. It’s called Rebecka Martinsson.  It had its English released two or three years ago. I’m doing a lot of different things, Simon, but this is my next big thing I’m doing and I’ll be living up there to shoot for a few months.