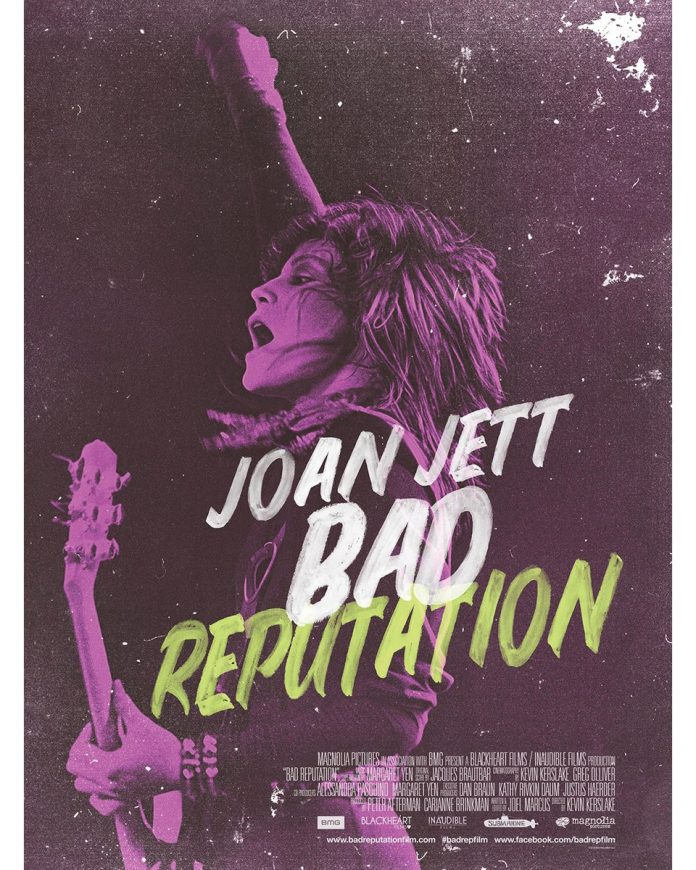 Iconic wanton women of rock are few and far between. Geordie batterer of toilet attendants Cheryl Tweedy nee Cole nee Fernandez-Versinini nee who knows what her surname is this week despite her PR’s insistence that she’s the nation’s sweetheart but will be as quickly forgotten as her last hit record. Joan Jett is a different matter altogether. Bad Reputation takes a chronological look at her career and her fight against the sexist macho rock business.

Having been born Joan Larkin she started off at 16 years of age gigging on the rock club scene, an age when today most wannabe singers can’t see beyond the X Factor.  Quickly forming the all girl band The Runaways and managed by a man who Iggy Pop rightly described as looking like Frankenstein’s monster on crack they soon garnered a following. Yet this was doomed to fall apart when the lead singer unknown to the rest of the band started posing in lingerie for a Japanese fanzine. Even when the band fell apart and ran away from each other during the Japan tour Jett was determined that the band that she had formed would continue with her as the lead singer.

In the ‘rule of 3’ game where someone’s fame is measured by being able to name three of that person’s most famous songs/ films etc Jett’s, for most people, probably starts and ends with her own version of  ‘I Love Rock n Roll’ a growling monstrous anthemic riff that made No I in the US for seven weeks in 1981 and was a huge hit worldwide. But there were other hits too : the great ‘Cherry Bomb’ she recorded with The Runaways and later in her career ‘I hate myself for loving you’.

It’s a bit of a misnomer to call the documentary Bad Reputation as Jett, from what’s seen here, is held in high regard, respected and admired as being a role model for female musicians in an industry run by men…. and Simon Cowell. Icons such as Iggy Pop, who here continues to look as though he’s been exhumed, are only to happy to sing her praises.  Never really changing her look from the heavy eye liner and exploding black cat hairdo,  apart from one bizarre TV interview where she’s completely completely bald having shaved her head, is interviewed by bloaty, bigot Roseanne Barr, Jett comes across as the rock chick who has struggled and achieved everything on her own terms. Whether it’s going out of her way to support the Riot Grrrll music scene through to her support for animal activism, vegetarianism and later in the movie even transgender artists.  Although frankly the documentary ‘s credibility takes a knock when tiresome tuneless tosspot Miley Cyrus pops up spouting excitable platitudes like a 9 year old high on E numbers, fizzy pop and desperate to use the toilet.

At times it is perhaps a little too reverential the documentary is perhaps too niche for anyone under 30 but it’s clear from this that Jett has anything but a bad reputation.