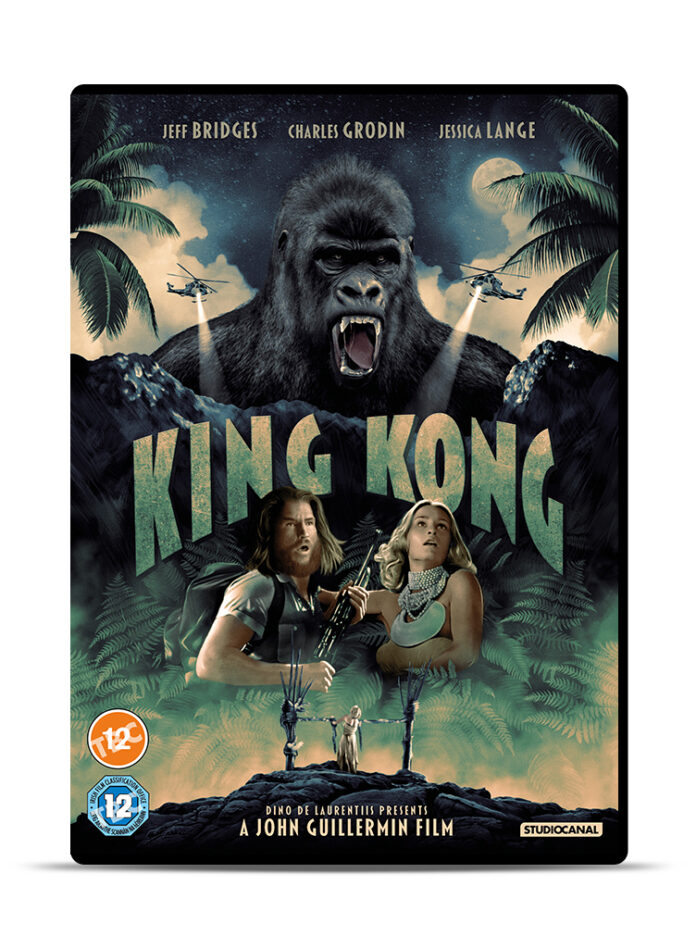 Whilst the 1933 version of King Kong remains a beloved and iconic classic with a stop motion monster that inspired a generation of film makers it was inevitable that an updated remake with a more state of the art ape would be made. And that that’s what the late producer Dino De Laurentiis did are moving to Hollywood and achieving critical acclaim and box office success with ‘Serpico’ before he set his eyes on a King Kong (1976) remake. Announced to the world press in January 1976 in a typically showman like way he revealed that Jeff Bridges would star alongside a hitherto largely unknown model Jessica Lange who he had signed to a seven year contract determined to make her a star. But what of the real star of the show, Kong himself? No stop motion here, instead it would be a combination of the work of make-up artist Rick Baker, who was quickly establishing himself as one of the best make-up artists ever, with a full scale mechanical ape. Except it quickly became clear that a 40 foot working ape was impractical and massively expensive and instead was reduced to building an arm with a large scale dummy Kong that would be laid on the Plaza outside the World Trade Centre where the film would end despite the Empire State Building campaigning to have the film shoot there where the original film had ended.

This version of Kong would be extremely effects heavy using front and rear projection, matte paintings, miniatures, stereo projection, split screen and blue screen (a new technique at the time) many of which would be overseen by the seventy one year old Harold Wellam who ironically had worked on the 1933 Kong as an uncredited assistant cameraman. Already the films $15m budget (at that point in time, the most expensive film ever made) would soon balloon.

Helming the film would be John Guillerman whose previous had include the all-star disaster epic The Towering Inferno and was keen to direct the film but it soon became clear that the scheduled release date of the film for Christmas the same year was extremely tight. Things for production quickly got worse almost immediately as it was beset with problems of giant ape proportions and nearly all due to trying to build an ape of such a size that could never be successfully achieved. Soon the film began to go over budget and De Laurentiis was rumoured to be putting his own money into the project. Late August 1976 saw the  film eventually wrap after a mammoth 140 day shoot and $9m over budget leaving  only three months before it was set to be released on 17th December that year with De Laurnentiis hyping the film as being bigger than Jaws. He was wrong because whereas Jaws, at the time the most successful box office film ever earning $476m, the 1976 version of King Kong would earn only $52m.

De Laurentiis version was the second of three Kong films with director Peter Jackson completing his own version in 2005 with state of the art effects something which the 1976 version did not have with CGI still decades away. But there is still something likeable about this version with Rick Baker often in full ape outfit battering away at scaled up sets and Lange & Bridges, a likeable pairing with Guillerman doing a sterling job mixing and matching the various effects and tricks needed. It’s a film that needs to be seen isolation without comparing it to the 1933 and especially the 2005 film. Yes it’s a bit hokey but it has a scale that impresses even if the effects don’t. 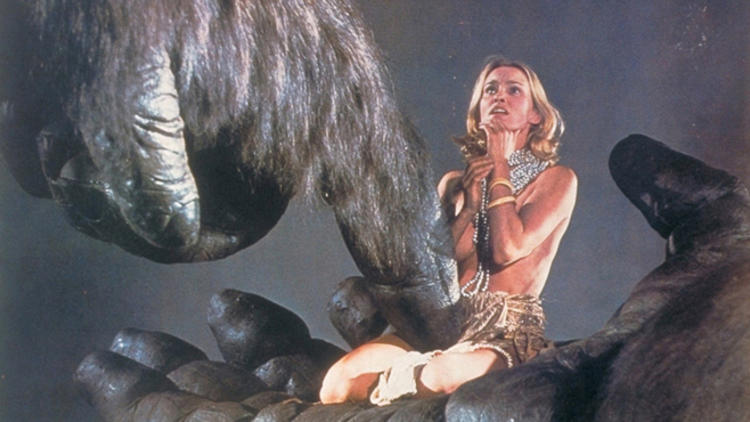 With a new 4K restoration UHD and blu-ray release this version has a hugely impressive array of bonus features that includes..

The commentary with Rick Baker is an absolute must as his insight into the effects make-up he designed (and wore) is revealing and is an insight into an artist who would go on to win a record 7 Oscars throughout his career before he retired. – he did go on to make a cameo appearance in the 2005 version as a bi-plane pilot that shoots Kong down from the top of the tower. Though both Guillerman and De Laurentiis have long passed away the interviews with technical supervisors are well worth a look. The theatrical version was shorter  from what was broadcast on TV which  included scenes of Kong fighting a giant snake as well as several other scenes mainly of Kong going berserk and a few narrative scenes with the actors.

Don’t write off this version of Kong because it was Oscar nominated for its cinematography as well as its sound and did win a= rather dubious Academy Award for ‘Special Achievement’ which went to Carlo Rambaldi who would go on to design Spielberg’s  E.T. a few years later and though Lange had a hard time on what was her first feature film she herself won a Golden Globe for Best Acting Debut.