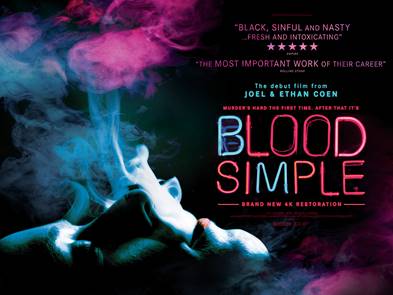 Re-releases of old films can be a bit of a mixed blessing but most are well worth it. This year saw Terminator 2 (unnecessarily in 3D) back in the cinemas which still seems as fresh as it did 27 years ago and the next few months will see the re-release of The Shining for Halloween, followed by Predator, The Big Heat and A  Matter of Life and Death. This week sees the brief return of the Coen brothers debut , ‘Blood Simple’.

Originally released in 1984 it was a feature length film noir centred around that most hackneyed of stories : the adulterous wife and her vengeful husband. It’s a simple and well worn story but in the hands of the Coens it turns into a brilliantly tense story. Starring Frances McDormand, who was to later marry the director Joel Coen, she plays the wife to a brutal bar owner, Dan Hedaya who has hired a sleazy and insensitive private detective played by  a cant-take-your-eyes- off-him M. Emmet Walsh to find out if she is having an affair and, if so, with who. The detective duly sets about his task finding out that she ‘s having an affair with one of the barman Hedaya employs . What follows is a litany of twists and turns you never see coming and each one making the plot ever more complex and at times brutally unpredictable.

Hedaya and Walsh are especially good and the Coens have the film noir style down to perfection and Blood Simple marked them out as film makers to keep an eye on. The brothers had a great DoP in Barry Sonnefield in what was his first feature film and its richly lit with the rich hues of any film noir. The difference here is that this is a director’s cut something that you don’t readily associate with the Coens but here they’ve actually cut the picture down by a few minutes and it makes a significant difference from the original which was, in places, a little slow. No scenes have been added but some have been trimmed down which improves on the films pacing. It’s been edited down by Roderick Jaynes a wholly fictional person whose real identity is the Coen brothers themselves and the film has undergone a superb 4K restoration too.

If you’ve never seen the film before or not seen it on the big screen then this is an ideal time to see what is undoubtedly one of the Coens greatest films.