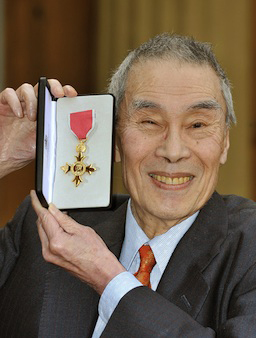 The role was his big break having been acting for 10 years having actually started acting in 1954. Born in Manchester in 1930 but raised in Shanghai where his family’s wealth was wiped out in the revolution of 1949 it prompted their return to the UK.

But prior to the big break he had also appeared in the TV series ‘Hancock’s Half Hour’  – one of his very first acting jobs appearing as Burd Kwouk and went on to do a number of other TV shows before his first major film as Mr Ling in ‘Goldfinger’  and also appearing in another Bond film, ‘You Only Live Twice’ in 1967 as well as in Casino Royale the same year which was not strictly speaking an official Bond film. These were all after his first appearance as the manservant Kato in the 1964 film ‘A Shot in the Dark’ and the next film in the franchise was not to be until 1975’s ‘The Return of the Pink Panther’.  The role lasted him right through to 1992 long after Sellers death in 1980 where further Pink Panther films were cobbled together from outtakes and at one point the iconic role, or rather a character that was the son of Clouseau, was taken by Roberto Benigni to disastrous reviews.

By then Kwouk’s face was already well known and had had roles in many diverse projects including the Avengers for TV, ‘Rollerball’,  Spielberg’s ‘Empire of the Sun’, and ‘’The Fiendish plot of Dr Fu Manchu’ which was to be Sellers last film.

A rarity among actors in that he married in 1961 and stayed married until his death at the age of 85 having been awarded an OBE in 2011.