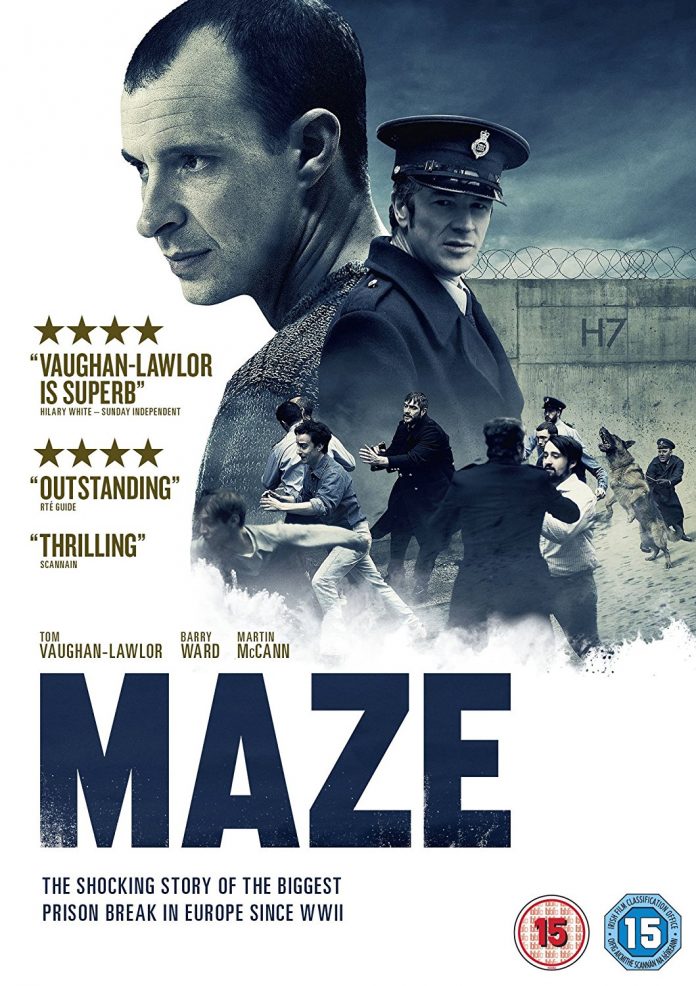 There’s usually two reasons why films are not screened to critics and its either because it’s big blockbuster which are normally only screened a matter of days before they’re released in order to up the anticipation or the other reason is that they’re a complete bomb of a film which would be best served being buried at the bottom of a trench in the Pacific ocean.

Unusually Stephen Burke’s ‘Maze’ opened without previews. Unusual because it’s a gripping film and achieved the biggest opening weekend of any Irish film in Ireland and Northern Ireland since “ROOM” in January 2016. The film ran for ten weeks, spending five of these in the Irish top ten, and achieved a box office of over one million dollars (£764,874) in that time.  A pretty good achievement for a film that only showed on 65 screens in Ireland.

Based on the true story of the 1983 mass breakout of 38 IRA prisoners from HMP Maze high-security prison in Northern Ireland.  As Larry Marley (Tom Vaughan-Lawlor), the chief architect of the escape, schemes his way towards pulling off this feat, he comes into contact with prison warder, Gordon Close (Barry Ward). Initially Larry and Gordon are confirmed enemies, born on opposite sides of Northern Ireland’s political divide, but when Larry realises that Gordon may be unwittingly useful for his escape plan, a slow seduction begins. Larry intends to use and manipulate Gordon in order to get closer to his goal but what follows is a tense, and intriguing drama in which an unlikely relationship is forged between two enemies that will have far reaching consequences for both of them.

It was an audacious breakout and a politically embarrassing story for the British government and this is a pretty faithful adaptation and regardless of your politics is well worth a look.