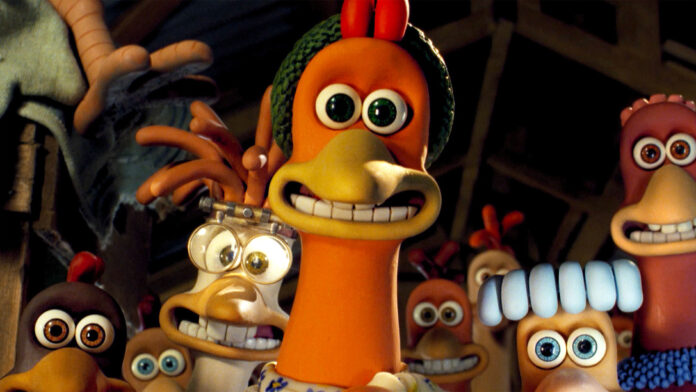 By now we’re more than used to decades long gasp between sequels with Matrix Resurrections arriving 18 years after the third film and Blade Runner and Blade Runner 2049 having a 35 year gap. Well now there’s news of a Chicken Run sequel which was way back in 2000 and remains  the most-successful stop-motion animation film ever.

rumours of a sequel having been kicking a round since 2018 but it Netflix (again coming to the rescue) who have taken the opportunity with the follow up film to be titled Chicken Run: Dawn of the Nugget, and arrive  on the streamer in 2023. What is a surprise though is that despite featuring the same characters there will be a mostly new lineup of voice stars.

Replacing Mel Gibson as Rocky the heroic rooster is Zachary Levi,  Thandiwe Newton takes over from Julia Sawalha as Ginger (understandably its not gone down well with Sawalha who has accused the filmmakers of ageism), whilst Game of Thrones star Bella Ramsey will voice Rocky & Ginger’s daughter, Molly.  Returning voices will be Jane Horrocks as Babs, Imelda Staunton as Bunty and Lynn Ferguson as Mac who will be by joined by new additions Josie Sedgwick-Davies as Frizzle, David Bradley (Harry Potter) as Fowler, Romesh Ranganathan as Nick, Daniel Mays as Fetcher and Nick Mohammed as Dr. Fry.

The Chicken run sequel will be set shortly after the death-defying escape from Tweedy’s farm and will see Ginger having finally found a peaceful island sanctuary for the whole flock, far from the dangers of the human world. When she and Rocky hatch a little girl called Molly, Ginger’s happy ending seems complete. But back on the mainland, the whole of chicken-kind faces a new and terrible threat. For Ginger and her team, even if it means putting their own hard-won freedom at risk — this time, they’re breaking in!

The other news is that Aardman have a new Wallace & Gromit film – the first in 14 years released.  and will see Gromit’s growing concern that Wallace has become over-dependent on his inventions justified when he invents a “smart gnome” that seems to develop a mind of its own. As events spiral out of control, it falls to Gromit to put aside his qualms and battle sinister forces – or Wallace may never be able to invent again!

Peter Sallis, the inimitable voice of Wallace, sadly passed away in 2017 and there’s no news of who will now voice the character