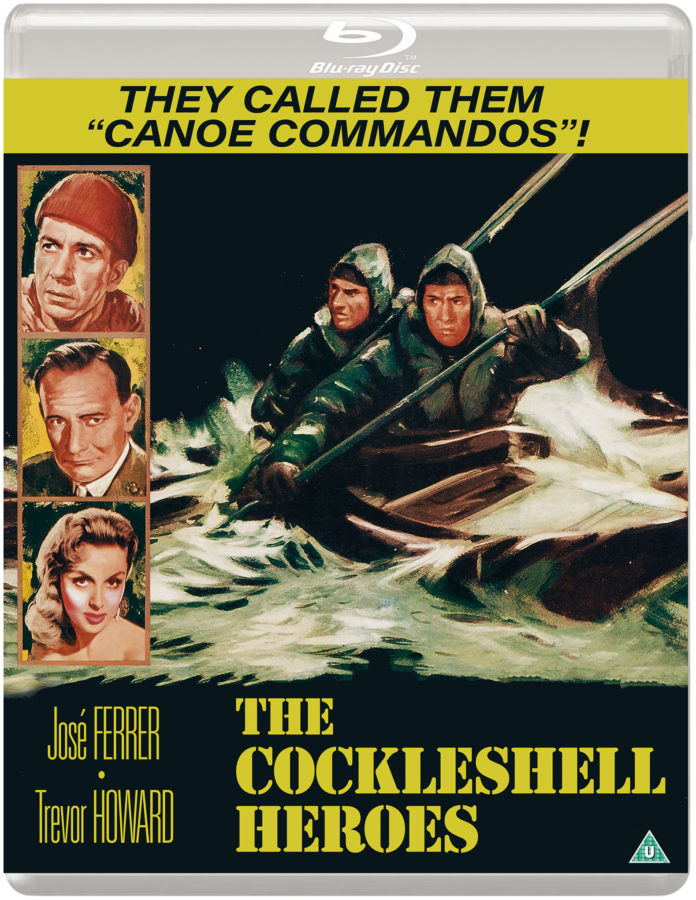 There’s been a run of films from the Fifties recounting some of the stunning achievements by the Allies in the Second World war – Sink the Bismarck was a recent re-release and now we have The Cockleshell Heroes a 1955 tale of what appears to be an utterly bonkers idea by the Brit.

At the height of the Second World War a battalion of German Ships were safely docked in an unassailable port of Bordeaux. Newly promoted Major Stringer (Jose Ferrer who also directs) has a unique if not lunatic idea – send a team of commandoes out in collapsible canoes, have them paddle seventy miles upriver in arduous conditions and blow up the German ships with limpet mines. Quite why the Major didn’t get sectioned is anyone’s guess but they went ahead with the plan anyway and The Cockleshell heroes is one of those films that’s been forgotten but if it was on the TV one Sunday afternoon you’d love it.

Operation Frankton was the actual name for The Cockleshell Heroes and was the fifth of twenty one  films made by Warwick films a company run by the experienced and bombastic Irving Allen and former agent and far more diplomatic Albert Broccoli. As Americans they were keen to take advantage of the UK’s Eady Levy which skimmed money from cinema tickets to reinvest into British films with Brit stars and the more your film made the more you got back for your next film and it was this that Warwick films did to make The Cockleshell Heroes. The British cast included Trevor Howard and Christopher Lee plus a host of less well known faces playing stock military roles. David Lodge was one of those actors and  later in his career he went on to work in Spike Milligan’s seminal Q series where there was a running joke that he’d drop in the line , ‘I was a Cockleshell hero’ into the surreal sketches.

However it was the American actor Jose Ferrer who took the lead role. He was a hot star by the time the film went into production having won an Oscar and its seems to have gone to his head when he began directing with the scenes all featuring him heavily to the detriment of the other actors to such a degree that the studio covertly shot scenes again behind his back to get the other actors featured and its noticeable that in several of the scenes that ‘Ferrer’ has his back to camera as it’s a stand in.

The Cockleshell Heroes had been written by Bryan Forbes and Richard Maibaum who ended up rewriting each others work and the film was shot in Shepperton before decamping to Portugal for the exteriors with soldiers from the operation acting as technical advisors. The film did well at the international box office when it was released as did all, ‘men-on-a -mission’ movies at that time and this was resolutely upbeat despite some of the soldiers not surviving the operation. The success of the film led to Broccoli wanting to try other genres including a little know spy known as James Bond but Irving Allen was not interested so Broccolli left to form a partnership with Harry Saltzman…rumour has it that the Bond films apparently did quite well.

This is a great little film which whizzes along and is amazing that what seems such a ludicrous idea by the military achieved its objective. Apart from the film itself which is released on Blu ray for the first time the only bonus feature is film historian Sheldon Hall talking about the film. He’s done these type of things for other discs and it’s an extremely good little featurette with Hall superbly knowledgeable about the film and its background and is well worth a look.