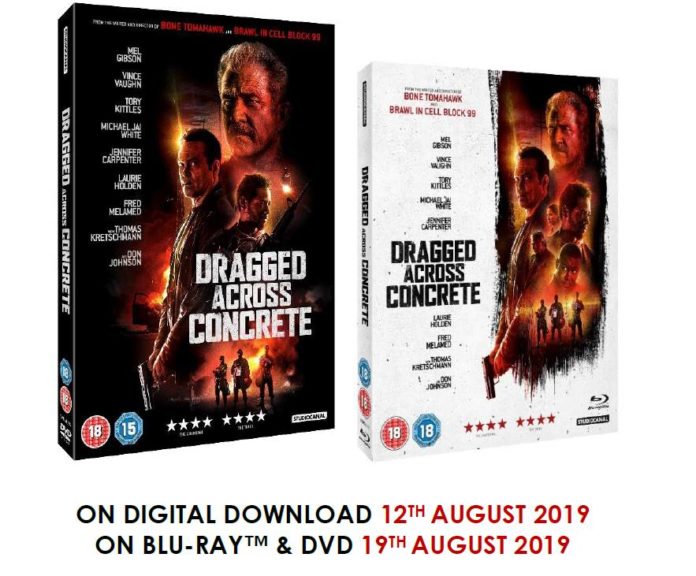 With the release of the Dragged Across Concrete blu ray & dvd writer director S Craig Zahler’s films are often compared to Tarantino’s – mainly due to the characters who just talk about trivial things to each other but there’s also the extreme violence. However whereas Tarantino’s violence is brutal and let’s be honest entertaining it pales into comparison with Zahler’s which is wincingly, turn-away-from-the-screen brutal.  Zahler’s first film ‘Bone Tomahawk’ was a western that featured Native American cannibals fighting cowboys in the Wild West with a scene that would make all the men in the audience wince. His next film was ‘Brawl in Cell Block 99’ starring Vince Vaughn in the lead role which mercifully took him away from the increasingly awful comedies he was making.  A prison movie, it featured a shaven headed Vaughn battling his way through the system run by a sadistic jailhouse governor in order to get to the Mr Big in order to save his wife and their unborn child. It was a story that became increasingly brutal but was a really great film that deserved a wider audience. 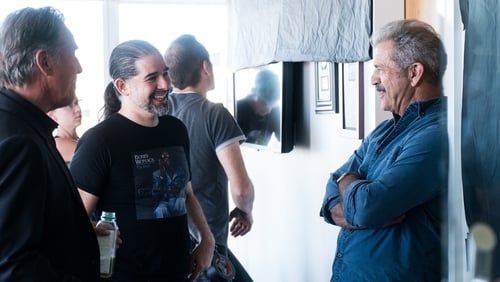 It was Vaughn who Zahler wanted to play the lead role in Dragged Across Concrete but the actor having just worked on Mel Gibson’s Oscar nominated ‘Hacksaw Ridge’ saw the film as ideal for the Aussie. Gibson loved the script and was on board with the tow paired up as ruthlessly efficient cops staking out a drug dealer and dealing with him in a somewhat forceful manner. Few would argue with their methods to get the results decent people would want. Unfortunately for both cops a liberal minded neighbour has filmed their unconventional  methods leaving them suspended and in danger of losing their jobs. 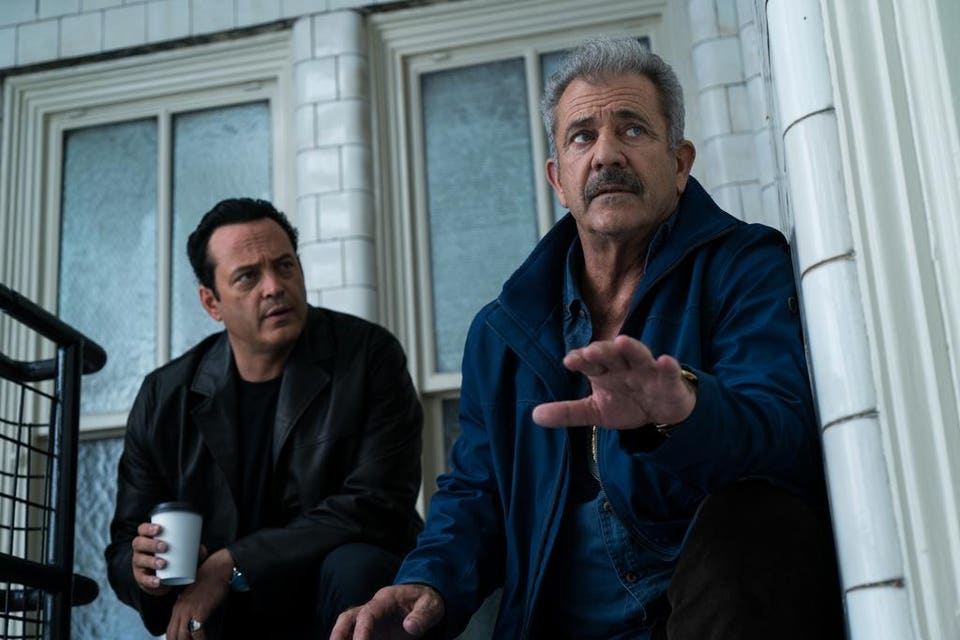 Gibson plays Brett Ridgeman the older more experienced of the two and an old school cop who gets results but is too set in his ways to adapt to modern and, in his mind, weak policing methods. Vaughn as Lurasetti  though younger is of the same mind set but is resigned to his fate but Ridgeman is having none of it – constantly overlooked , his work under appreciated, his means to an end approach getting the desired result and yet now finding himself under a disciplinary – it’s something that many old school cops can probably identify with in an age of snowflakes. So Ridgeman, at risk of losing his job and pension, decides to take what he believes he is owed except it will be from the villains he catches and when he hears about a bank robbery being planned he talks Lurasetti into helping him out with the intent of taking the robbers ill gotten gains for themselves. What follows is a stakeout as they carry out surveillance on a disparate group of characters they suspect are involved including a pair of low level  criminals who don’t realize quite what they themselves have got into.

Dragged Across Concrete is typically Zahler–sque. At 159 minutes the film is long with the characters talking about everything  and nothing as we get to know them and their personal lives as well as the periphery characters with Tory Kittles and Michael Jai White finding themselves involved with a sadistic gang who don’t’ hesitate at executing anyone for anything. What is different here is the violence that was a constant in Brawl in Cell Block 99 now is kept to a bare minimum only coming to the fore in the last act in a scene that typically requires a strong stomach.

Zahler now has regular troupe of favoured actors that are evolving as he makes each new film with Vaughn, Don Johnson, Udo Kier and Jennifer Carpenter being his regulars and it would be great to see Mel Gibson join them as here he is perfect as a world weary and embittered cop that seems to represent how he must be feeling towards Hollywood having spent so many years in the wilderness.

The Dragged Across Concrete blu ray looks great helped by cinematography by Benji Bakshi who has lensed all of Zahler’s films to date. The disc is thin on bonus features with just four reasonably lengthy featurettes which are fine but it would have been great to have had a commentary with the director and two stars and the disc doesn’t even have a trailer. However Dragged Across Concrete might disappoint those wanting something quicker paced but those prepared just to sit and enjoy the characters talking and riffing off each other this is a film for you and certainly from our point of view Zahler’s film, much like Brawl in Cell block 99, is likely to end up on our Best Films of 2019 list