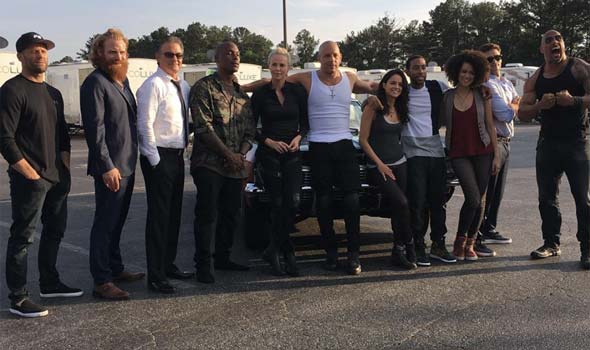 It’ still a year away with it s release date of April 14th 2017 and Universal Pictures have released a new full cast photo from the F. Gary Gray-directed “Fast 8” which includes first looks at two “Game of Thrones” actors – Kristofer Hivju (who plays Tormund Giantsbane) and the returning Nathalie Emmanuel (who plays Missandei).

From left to right the shot includes: Jason Statham, Kristofer Hivju (who appears to have a beard made of ginger pubic hair), Kurt Russell, Tyrese Gibson, Charlize Theron, Vin Diesel, Michelle Rodriguez, Chris ‘Ludacris’ Bridges, Nathalie Emmanuel, Scott Eastwood (yes, that is Clint’s son!) and Dwayne Johnson (who seems to be in pain).

The new film is currently in production and has been shooting in Cuba and is the first major US movie to film there since the decades old embargo was lifted. The film will also shoot in New York, Atlanta and most bizarrely of all, Iceland – so we can expect some mad stunts on ice presumably.

It’s currently shooting in Cleveland where this bit of footage was caught by an AGF reader…..