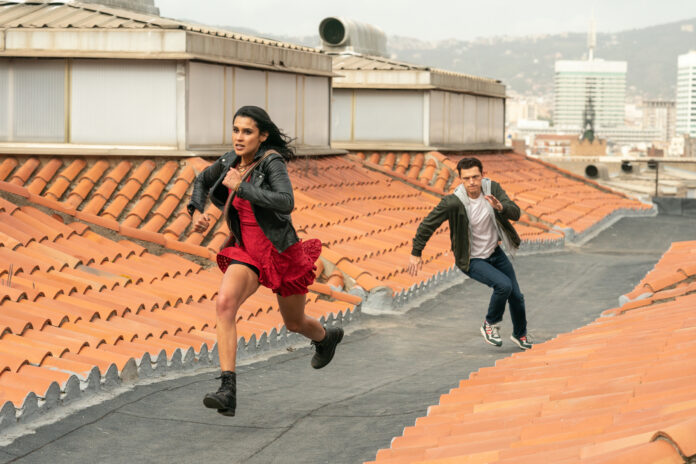 Latest in the long line of video game adaptations is Uncharted, long in development having passed through various hands before director Ruben Fleischer (Venom) took the reins. The road taken with this first film in an obviously hoped for franchise is that of the origin story with Tom Holland as a twenty something Nathan Drake bought up in an orphanage with his older brother Sam who runs off before he is kicked out after the pair of them are caught in a late night break in.  With a promise to Nathan that they will meet up again and go on another adventure it the last that Sam is seen.

Catching up with Nathan (now played by Tom Holland) he is working as a cocktail barman where he has somehow developed the skill of a pickpocket as seen when he steals a bracelet from a female customer. Seen by Sully (Mark Wahlberg) who knows about Nate’s lost brother he persuades him to go on a treasure hunt that involves solving a series of puzzles with a pair of ornate gold keys to find a fortune in Spanish gold lost 500 years ago. The other gold key is owned by fellow thief / treasure seeker Chloe (Sophia Ali) with an accent that’s as well travelled as our heroes taking in as it does England, South Africa and Australia none of which convince. The trio are not the only ones after the gold with a wealthy and ruthless Santiago Moncada (Antonio Banderas) who believes he is the rightful heir to the riches.

Falling firmly into the Indiana Jones mould – which they reference in the dialogue – this follows the same path of puzzles as the Lara Croft Tomb Raider adaptation did albeit at no point does Holland wear tight shorts though the film makers aren’t shy to parade his eye candy toned torso. Taking much of its inspiration from the Uncharted 4 game this has two stand out set pieces best of which is the iconic cargo plane as Nate scrabbles over the about to be dumped cargo. But this plays much like Tomb Raider which in itself was a nod towards a modern day female Indiana Jones. Holland is fine in the role and Wahlberg for once plays the sidekick with his usual sardonic brio. For Banderas though this is very much a, ‘will act for pay’ performance barely in the film and his sidekick Braddock (Tati Gabrielle) with silver hair looking like a perished swimming cap is somewhat generic stuff.

Uncharted breezes along but for the notoriously hard to please gamer fans this is unlikely to satisfy and like Nate’s faulty cigarette lighter it splutters into life but with little spark and the mid credit sequence suggestion of a sequel night be a little optimistic.