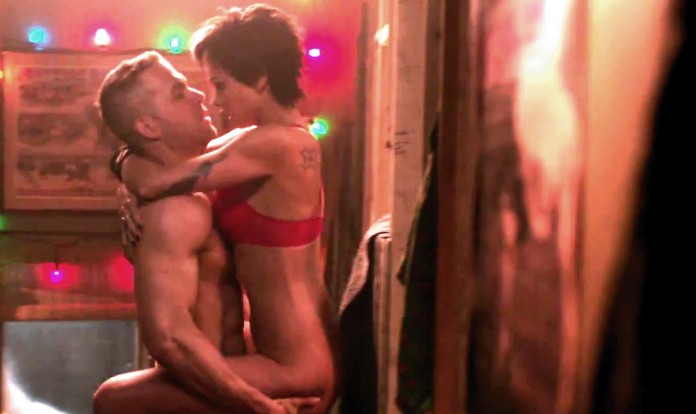 Alvin & the Chipmunks: The Road Chip (U)

The fourth in the pun-tastic  kids franchise. Someone find a shotgun please!

Who’d have thought that Will Smith as a pathologist would uncover a link between brain damage and US football players suffering concussion whilst trying to get an Oscar nomination. A no brainer really. D’oh!

More like Zoolander Poo! (You’re an idiot – Ed). Alleged comedy sequel delayed for 15 years – here’s to it being another 15 years before a third is even considered.

Our first thought when seeing the title of this week’s new film was that it was about one of our writers enduring the myriad and never ending stream of bad jokes the Editor comes up with on a daily basis whereas this is actually about a lone male living deep in the forest and living off a small allotment of vegetables he grows. It doesn’t sound the most enthralling of set ups but what follows is, at times, very uncomfortable viewing.  The first twenty minutes or so is near wordless as we follow Martin McGann as the unnamed protagonist going about his business of foraging for food, planting his mini crops and of course burying a dead body. We don’t know who he is, why he’s there, how long he’s been there, or what’s happened and this is very much in keeping with the whole film in so far as the demands made on the audience is to work out just why he is in this situation in the first place.

It’s a far from ideal existence he leads as the garden shed he effectively lives in is locked down each night to protect him from …well who knows?  But his existence is threatened by the arrival of two women (Mia Goth and Olwen Fouere) who ask him for some of his food that threatens his lifestyle. In one of several uneasy scenes to watch he feeds them in  exchange for what can best be described as some horizontal jogging exercise and they manage to persuade him to stay where he forms a relationship with the Mia and bit by bit its revealed just how he’s come to be there.

Though there is some dialogue this is at times an almost silent three hander chamber piece with the audience having to work out just what is going on and it’s refreshing to have a film prepared to challenge its audience as such. But it’s not the only demand made as director Stephen Fingleton in his first feature film debut has included some wince inducing moments which some may find hard to watch including a rabbit being skinned but also a scene where, having fallen pregnant, Mia attempts  to ‘lose’ the unborn baby.

Ultimately their oasis comes under attack in a home invasion type sequence and the future of their newly formed family unit is threatened.  This is something of an art house film with a pertinent dig at society where when society has been reduced to almost caveman levels we will still be obsessed with possessions and in many ways we’ve barely evolved.

Pride and Prejudice and Zombies (15)

Classic English literature is not renowned for its monsters apart from maybe Beowolf & Frankenstein and many titles lend themselves to other genres –  Cold Comfort Farm  (animals trying to keep warm in the winter?),  The Wind in the Willows (flatulence in a forest?) and the less said about ‘Of Human Bondage’ the better.

So monster mash ups are very much of the day or least have been for a decade or so with Pride & Prejudice & Zombies probably leading the charge. The classic Jane Austen novel  is pretty well known from numerous TV adaptations and with the story set in the 19th century it follows the initial resentment between Elizabeth Bennet and Mr Darcy memorably setting housewives hearts a flutter when Colin Firth in the BBC adaptation emerged from a lake in a 19th century version of a wet T shirt competition which oddly has been missed from this version. Here instead we have a steely eyed Sam Riley looking like a sober, drug free Pete Doherty in the titular role.

With the film still focussing  firmly on the love story this has both protagonists battling not just the class system but inevitably drawn to each other as they battle the marauding zombies trying to invade a London protected by a huge wall.

Since the novel appeared in 2009 it was optioned almost immediately by Natalie Portman who was originally slated to star in the film and  since gone through many directors hands including David O Russell and at one time even Jonathan Demme and Neil Marshall were shortlisted before it fell to Burr Steers, a director with little horror in his back catalogue and known more for his comedy.  Fans grew even more concerned when it was revealed that this was not going to be a full on hardcore horror experience especially since the graphic novel itself has some particulary gruesome slayings (throttled by your own intestines anyone?). Even more worryingly having been developed from a novel by Seth Grahame Smith whose own back catalogue has included Abraham Lincoln: Vampire Hunter (boring) and Tim Burton’s ‘Dark Shadows’( even more boring) fans may be rightly wary but thankfully director Burr Steers has taken over the writing reins and done a decent job here rewriting  the previous incarnations of the script and plays it absolutely straight with no sly winks to the audience and many of the laughs coming from the juxtaposition of zombie slayings against 19th century class manners. Exceptional amongst the cast are Matt Smith as a suitor for Elizabeth Bennet and Sally Phillips as her mother both giving comedy master classes.

So what of the zombies? The make up is especially good with flesh having fallen off zombies faces revealing jaw bones and teeth and this is as violent as a UK 15 certificate will allow with zombies heads getting blown off in vision, limbs lopped off and even a brief brain munching sequence but fans expecting to see full on Romero type evisceration will be disappointed. The certificate has meant that at times we get zombie POV shots (though the way it’s shot here seems that they all suffer from cateracts) to get around the bloodletting.  But this really is more in the vein of comedy horror than full on scares and though it is perhaps a little too long if you go in with the right attitude as to what to expect you shouldn’t be disappointed.

ANYGOODFILMS? – run by an dictatorial Editor with a God complex, written by bitter journalists with no expense accounts pandering to overpaid and insecure actors about some brilliant but at times jaw droppingly awful films. If only film credits were as honest… well it seems the much anticipated and long awaited  superhero film ‘Deadpool’ is just that film.

Starting with a slo mo shot tracing its way through the aftermath of this particular superhero’s latest trail of carnage the most enjoyfully disrespectful credits sequence with complete disregard for the cast, director, producer and genre sets the tone for the whole film.

Deadpool is certainly one of the lesser known heroes from the Marvel comics canon and is certainly the least kiddy friendly featuring as it does a ex covert ops soldier Wade Wilson (accurately casting Ryan Reynolds) making smart ass quips at the expense of all until he finds he has a terminal cancer. With the news temporarily putting an end to his wisecracks and his girlfriend Vanessa(Morena Baccarin) having to coming to terms with the limited lifetime left he’s offered a literal  lifeline by a private company to undergo an experiment that gives him accelerated healing powers. In time honoured tradition it doesn’t quite go according to plan after the rogue scientist Ajax(Ed Skrein – rhymes with spleen!) having grown tired of his quickwit, due to Wilson finding that the scientists real name is Francis, makes him suffer unnecessarily. With  the Op gone wrong Wilson finds his appearance horrifically disfigured and believing that Vanessa will no longer love him goes after Ajax to restore his looks renaming his now leather clad alter ego , Deadpool, in the process.

‘Deadpool’ has been something of a labour of love for its director and star and has been a film waiting for its moment for years. So whilst all the other superheroes got their PG family friendly franchises ‘Deadpool’ is a film that was only going to inflame the ire of its legion of fans if it was diluted to go down the same kid friendly route. That said with the amount of savagery, killer quips and off colour jokes it’s still only got a 15 certificate which is a wonder as some of the jokes are exceptionally crude and one particular moment in a sex montage that is more suited to an 18 certificate.

For the initiated this is an origin story though the film starts with Deadpool taking a taxi ride to an insanely entertaining though extremely bloody action sequence but taking a cue from Tarantino’s story structure the film flips back and fore from this sequence taking in how Deadpool got to that stage in the story before moving on. It’s a bold move and works well driving the narrative and keeping the interest. For a superhero film though it’s something of a change in the genre with hugely unsuitable jokes for any comic crazed child with some good gags which come so quick and fast that it’s easy to miss some good lines notably one at the expense of Ryan Reynolds and his previous attempts at being a superhero in the woeful mega-budget disaster that was ‘The Green Lantern’. But as off the wall as the film is which regularly addresses the audience directly and in one scene breaks the 4th wall of the 4th wall, the smart ass quips do start to wear a little thin. It’s also been unable to overcome the comic books usual limited portrayal of women as being  there solely for the love interest though here it presents them either as stocking clad ex prostitutes, surly sarcasm spewing teenagers or borderline diesel dykes.

That said it’s been unable to resist what seems to be a contractually obligatory cameo by Stan Lee in a scene that a 92 year old man must have relished ( – you’ll know why when you see the scene) and like all the other Marvel films, yes, it does have a post credit scene which owes an immense debt to ‘Ferris Buellers Day Off’. This is a bold and mostly successful attempt to do something different with the superhero genre which should please fans who have been waiting for years for this superheroes screen incarnation.