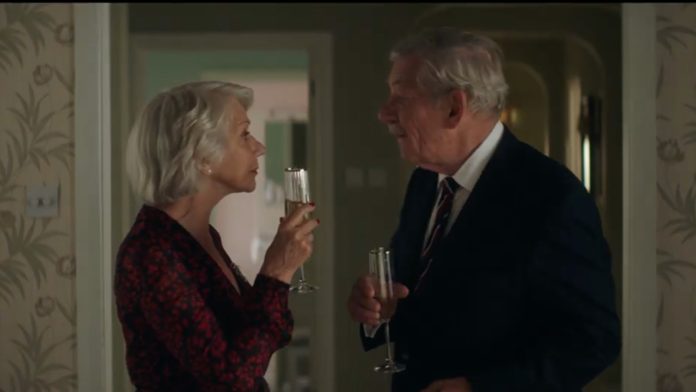 As obvious as this would be a title for former Prime Minister Tony B-liar and his dodgy dossier of dreck in the Gulf war The Good Liar lends itself to a film about a con man which in this case is Sir Ian McKellen. From the start him & Dame Helen Mirren are inputting their details into a internet dating site and let’s be fair who puts their real details into these? Take our Editor who would set up dates in what he hoped would be undercover police officers only to be disappointed when it turned out to be a 13 year schoolboy. (‘You’re fired!’ – Ed).

Meeting up up for their first dinner date all goes swimmingly well but admitting that their real names are Betty McLeish & Roy Courtnay. So far, so honest but it’s clear that Roy is not all he claims to be and gradually he wheedles his way into her affection and home and soon realising that she is rich pickings and an easy mark too if it wasn’t for her suspicious and protective grandson Steven (Russell Tovey) forever disrupting his efforts to transfer her savings to him aided by his cohort Vincent (Jim Carter) acting as a fake financial advisor.

The con is on and this type of films are intriguing in their intricate machinations with The Sting and Oceans 11 being great examples of the genre  and like them The Good Liar requires a certain suspension of belief to carry you along and there’s a glimpse of one of Roy’s earlier cons that great fun but with their victim cropping up later in the film out to get his money back.

Right from the start the real appeal of The Good Liar is its stellar pairing of McKellen and Mirren as effortlessly watchable as always an the story if shot from McKellen’s point of view and the film is aimed squarely at the gray pound audience who will be attracted by the pair tough probably shocked when his seemingly reassuring gentle character  slips on occasion to reveal a nasty, callous, violent C-bomb dropping villain.

Based on the book by Nicholas Searle , the Good Liar carries you along swiftly with a back story that drives the plot device which, when it eventually unfolds, is daft and not wholly credible . It’s an entertaining enough with two hugely enjoyable acting giants  in what is ultimately a ludicrous con.