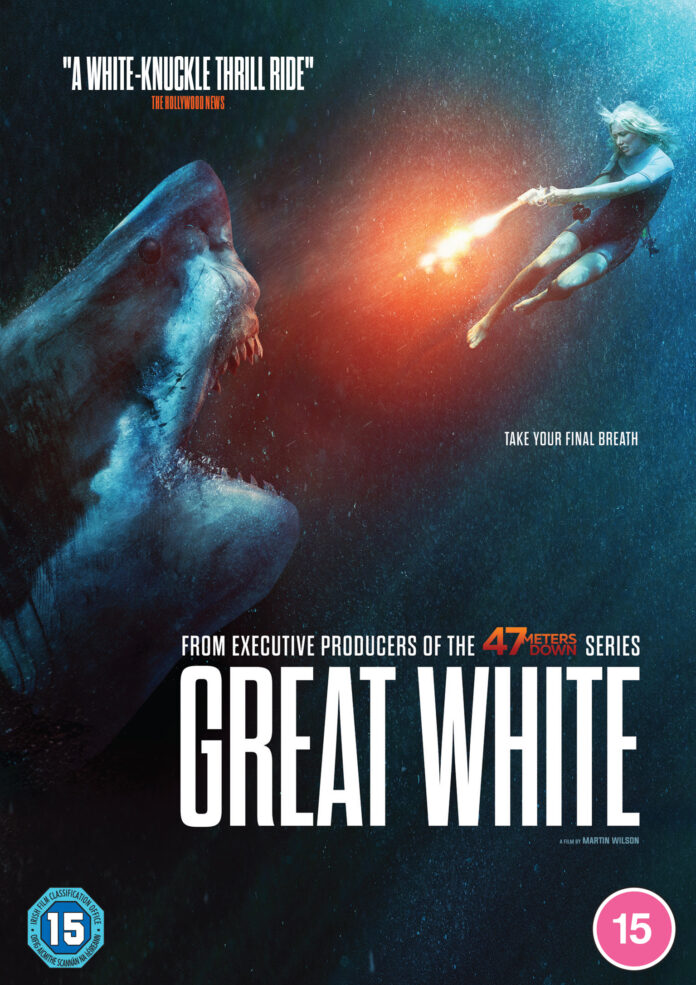 Great White, rather than being a film about South African white supremacists, is the latest addition to the long line of shark movies. This one is set in Australia where Charlie (Aaron Jakubenko with something of the Matthew McConnaughey about him – see our film clip HERE ) is an ex-marine biologist and sports a huge leg scar having left the job after a shark attack. So now he owns a private 5-seater plane taking tourists out to an atoll aptly named Hell’s Reef for exotic beach barbecues with his chef Benny (Te Kohe Tuhaka). Their business is struggling and Charlie’s wife Kaz (Karina Bowden) is in the early stages of pregnancy and is concerned about their future. 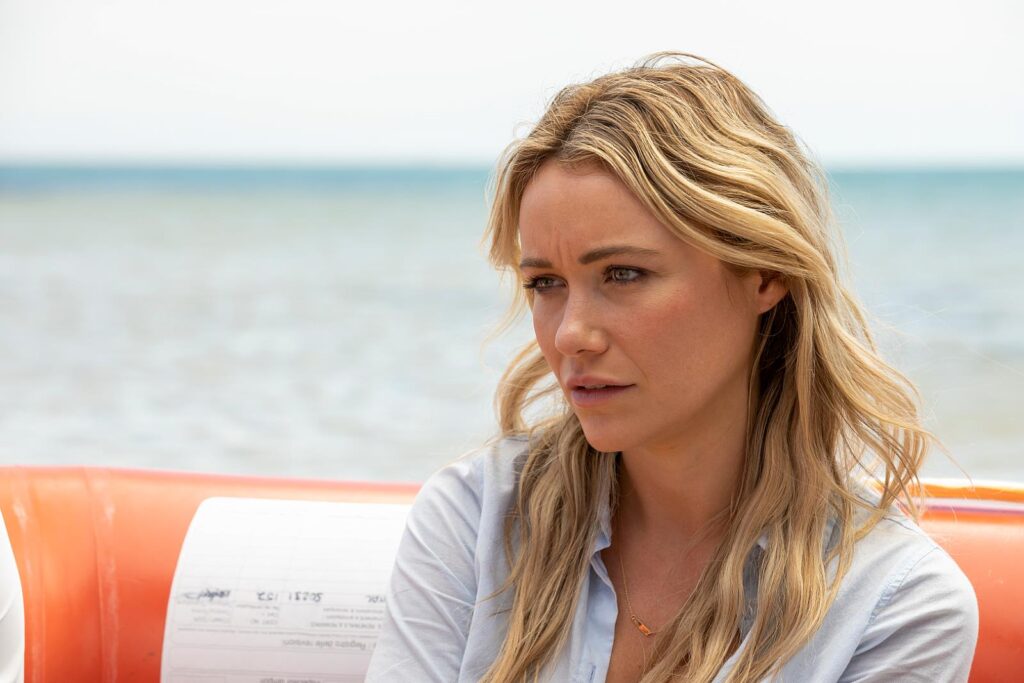 So when a newly wed Japanese couple make a last minute next day booking Charlie and Kaz can’t turn down the business and fly them off to the atoll for their barbecue. It will soon turn into a different type of barbecue once they get there. Like all shark movies the opening scene features the first attack making it clear what’s awaiting them and here it’s a young couple on their yacht taking a dip in the ocean only for the inevitable to happen. It’s the remains of the man they find on the atoll dead and who in retrospect must have been kicking himself if the Great White hadn’t bitten off his legs. 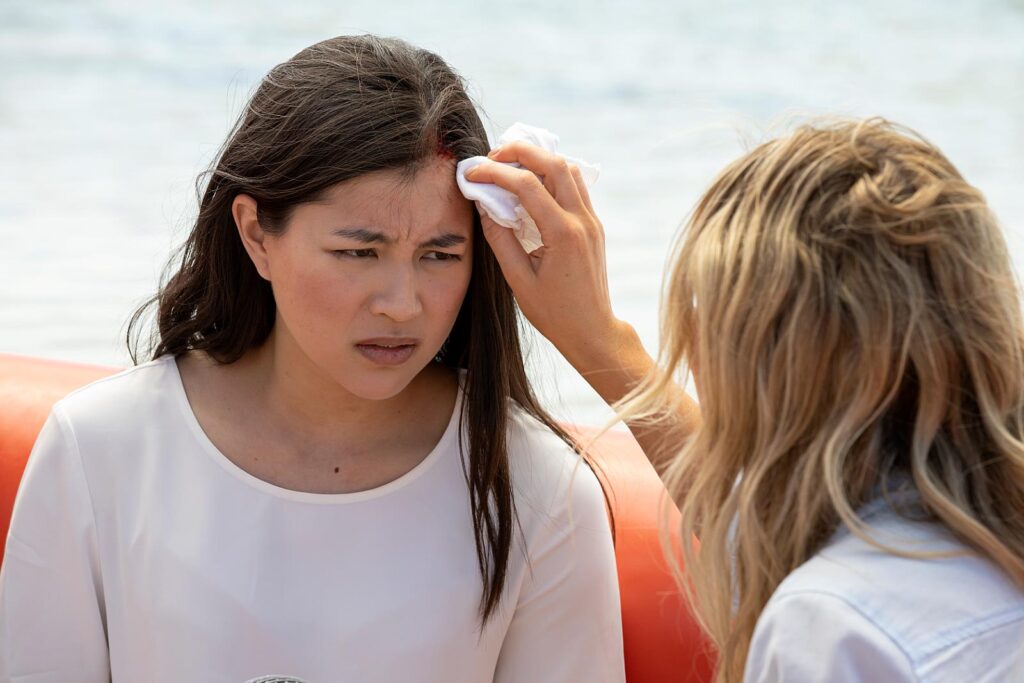 Suddenly losing their appetite for barbecued chicken legs they get back on the plane to return home only for the shark to attack the plane before it can take off leaving them scrabbling for safety in the inflatable life raft with the shark still circling. In a confined space in extreme survival conditions, tempers ultimately fray and this being a shark movie part of the fun is wondering who will become a shark snack first. So we have Charlie suffering shark attack flashbacks, Kaz the pregnant wife, Benny the macho chef, the jealously insecure tourist husband and his Japanese wife with a family link to the atoll. Now in the 70’s and 80’s it would be clear who would survive but in an era of woke-dom and #TimesUp it’s all too easy to know who if any will make it. 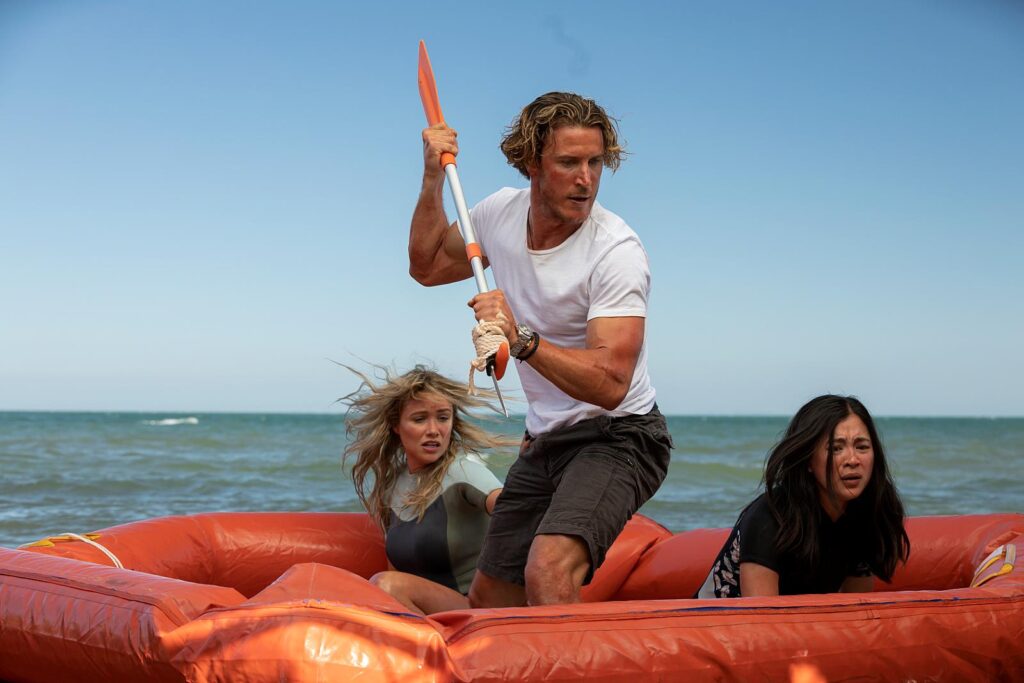 This is director Martin Wilson’s feature film debut having last helmed a TV movie way back in 2004 and he has captured the beauty of Australia with some stunning God’s Eye views of the lifeboat at sea though less persuasive is the cast in the life raft at night which is clearly shot in a giant water tank. Though Jaws remains the benchmark by which every shark movie is measured its model shark fooled no-one hence why it was kept out of shot for so long especially as it kept breaking down too. But CGI has come to the rescue and is utilized sparingly here but the CGI shark doesn’t always match the real life stock footage that is also used (Jaws also had a similar, though far less obvious, issue).  The scenario for Great White has the potential for maximum tension to be wrung out of the set pieces but is never fully exploited and running for 94 minutes it has some sluggish moments.

Great White plays like Spielberg’s ‘Jaws’ meets Hitchcock’s ‘Lifeboat’ (1944), one of his lesser known films, entirely contained within the one setting.  Both films were Oscar nominated, Great White won’t but for fans of shark shenanigans this doesn’t outstay its welcome.

Here’s our interview with director Martin Wilson about the problems with sharks….

Win the dvd of ‘Ratchett and Clank’ – EXPIRED