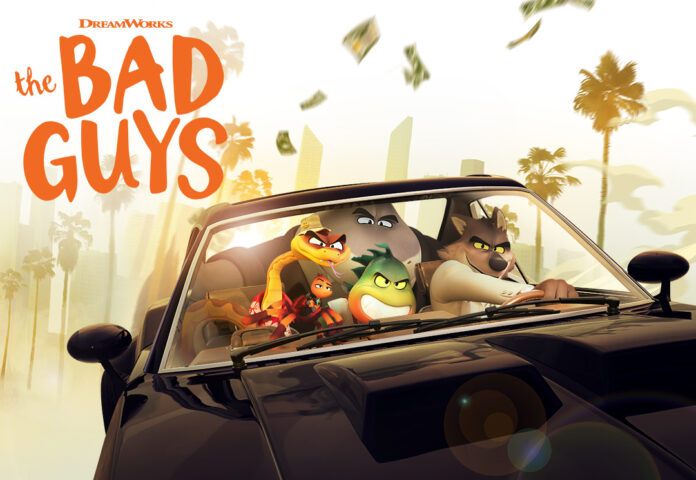 The Bad Guys are a bunch of animals that are never first choice on the Disney cute scale so in that regard we have Wolf, Snake, Tarantula, Shark, and Piranha all traditionally The Bad Guys as they are here with the five being a gang of notorious bank robbers. But forget any heist along the lines of the classic shootout in ‘Heat’ because here each has a skill that they use to steal a precious statuette…..except they’re up against a new  town Governor Diane Foxington determined to end the gang’s antics and lock them up. The heist goes awry and they do get caught at an awards ceremony for a loveable hamster, Professor Marmalade, who believes in the power of redemption and goodness and its him who persuades the governor that he can turn them around to be ….. …..The Good Guys!….ahhh we see what they’ve done there.

But all is not as it seems and The Bad Guys tale of redemption suggestions that these seemingly irredeemable gang of villains have an innate goodness at heart one that presumably will not persuade teachers of our Editors kids, Adolf and Damian, who the parents claim suffer from ADHD but the teachers still long for the days when the cane existed and could administer a near fatal beating of the little sods. The Bad Guys is the feature film debit of director of Pierre Perifel and there’s much for kids to enjoy from the scatalogical (a poisonously flatulent Piranha – possibly modelled after our own Editor after a night of Guinness and pickled eggs at The Nags Head), and a daft unconvincing master of disguise Shark that’s swept along with a bravura first act that has something of the early Tarantino films about it.

As with nearly every animated film it falls prey to the celebrity voice and here it is Sam Rockwell as Mr Wolf along with Awkwafina as Tarantula , both decent actors but here their voices are not really easily identifiable as themselves. On the other hand our own Richard Ayoade has that immediately recognisable voice and is well cast as Professor Marmalade the cutesy hamster that sees the best in everyone. The Bad Guys is frenetically based but the plot becomes increasingly convoluted as it goes along and for young children it will be the brightly animated animals that will be the draw.