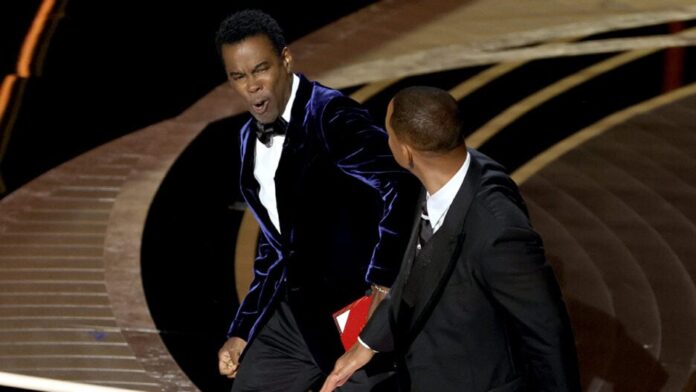 The Oscars are littered with memorable moments usually for the wrong reason and Will Smith’s assault on host Chris Rock certainly comes under that heading and probably will be the most notorious incident ever to occur at the awards ceremony. Reports are emerging that he was told to leave but refused. But there’s mixed messages coming out saying that he was asked to leave rather than being told as confirmed by Academy Board of Governors member Whoopi Goldberg who told viewers of TV show The View, “He actually was. He was asked to leave.” and went on to add,  “They come back from back from break, now if [Smith] is in some sort of state and he’s struggling and you’re trying to get him out the door and it’s on camera.”

The question now for Smith’s management is How does Will Smith career recover from that assault on Chris Rock at Oscars 2022?

Hollywood is divided. “He’s not kryptonite yet,” says one studio executive. “He has to sit in the penalty box for a bit.’’ And that may involve Oprah interview or such like. A public reconciliation would undoubtedly help on his Red Table Talk which featured his soul baring chat between him and his wife about infidelity. It may even serve him to stay behind the camera and produce rather than star in films

Producers with their eye on casting him are likely to be somewhat reluctant until this all dies down because any promotional junket will always see him , and other cast members, being asked about the incident. Equally any producer with a decent quality project might take advantage of attracting Smith in return for a reduced fee.

A leading Hollywood marketing executive is wary regarding the incident as having undercut the stars family image with a darkness not seen in public before and the self excusing acceptance speech he made followed by a night of dancing at a post awards party and then an instagram apology only worsened things. Smith’s career has been on a slow decline for some years with only the recent Bad Boys for Life and Aladdin being proper box office hits earning $426m and $1.05 billion respectively. Previous to this 2019’s Gemini Man bombed and other films have also underperformed or were critically  mauled.

Though several names, notably Whoopi Goldberg and others have come out in his defence others have spoken out against how Smith behaved. Jim Carrey has gone on record lambasting how the Oscar audience behaved by giving Smith  standing ovation when he won Best Actor. A member of the Academy has said, ‘he made me wish I hadn’t voted for him. It changed the whole tone of the evening. I will never, ever vote for anything Will Smith is in.” And others have said they also will never vote for him again.

The general consensus is that though his Oscar won’t be taken back the Academy must permanently expel him or forever by tainted if they take no action. Equally it’s also whether audiences will go to see another film he stars in and from a box office point of view that’s a major consideration for any studio and producer.