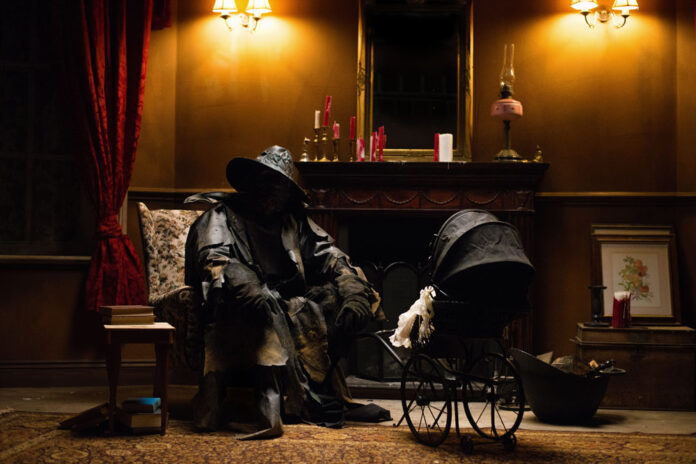 Ex-Eastenders actress Sydney Craven finds herself in the Deep South in Jeepers Creepers Reborn and whilst one production is full of seething psychotic inbreds barely able to string a sentence together the other is a horror film based in Louisiana. Craven plays Laine who along with her boyfriend Chase (Imran Adams) are on their way to a Louisiana Horror Hound festival where Chase also intends to propose not knowing that she is pregnant having missed the obvious sign of her running out of the car with a sudden bouts of nausea and not because the radio has the breakfast show being hosted by Amanda Holden.

Prior to all of this is a prologue that sees Marie (horror icon Dee Wallace) in a road trip with her husband and falling victim to The Creeper in his rust bucket van in road rage mood before they mysteriously disappear fuelling the legend of The Creeper a monster that horror fan Chase is obsessed along with many of the other festival attendees of either the lowest key of fests or victims of a limited budget with the pair arriving and seemingly doubling the number of extras hired to make up the crowd.  With the festival organisers arranging a prize draw for ‘The Creeper Experience’ – something that’s not been seen since the ‘Jim’ll Fix it’ TV series was taken off air – but  here it is a themed escape room which Chase is keen to win and when they do win the lucky draw they find themselves taken along with several others for the experience

The film’s legend has it that The Creeper appears only every 23 years and this is his year – although if the film makers had been smarter they would have released the film in 2024 making it 23 years after the first film – and the creature goes after each of the visiting party. It’s firmly in the genre of guess-the-order that-they-will-die. So a character who wears those above the ankle long trousers and no socks was always going to die if not by The Creeper then by the audience if they ever found him and another character with a beard that looks like he’s dipped his chin in glue and gone down on Judy Finnegan is another. Right from the start its clear who will survive and Jeepers Creepers Reborn fails to reboot with the smarts that reinvigorated horror franchises like Scream.

Having started in 2001 Jeepers Creepers has been a sporadic franchise with 14 years between the second the third film and this fourth film Jeepers Creepers Reborn and the return of its monster The Creeper, still looking like a walking prune that’s clothed itself  by rifling through the skip at the back of the local charity shop, had an effective chilling first and second film but this hoped for reboot with its  lack of what made those early films work is unlikely to have the franchise reborn.