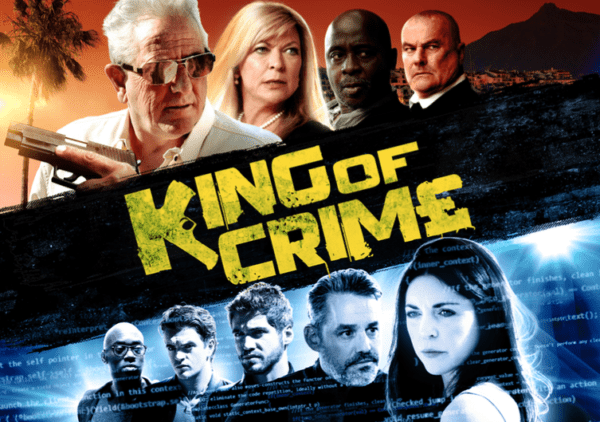 Who is the bigger King of Crime? Simon Cowell for foisting on us a long line of feckless caterwauling tosspots or Amanda Holden who, as an actress, has career highs that have included alleged comedy TV atrocity, ‘Big Top’ and perhaps most appropriately the voice of Sally the Dog in ‘Pudsey The Movie’?

Turns out that the King of Crime is actually Marcus King (Mark Wingett) an old school villain and the  biggest player in British cyber crime. Living the life of luxury in a huge mansion with his wife Yvonne, a murderously psychotic Claire King who bumps off her husband’s lovers aided by their butler Edward (Chris Ellison) he seems to be living the dream. It’s when  an Islamic king pin terrorist Mr Mustaffa (Vas Blackwood) moves in on his empire that Marcus decides to get out but not before settling some old scores.

King’s empire is aided not only by his psychotically jealous wife but also two equally unhinged twins one of which indulges in an on screen rape of Jessica (Rachel Bright) an employee who herself has a secret and along with her love interest Anthony (Hainsley Lloyd Bennett) is also one of many out for a bit of revenge on Marcus too. All is not as it seems though with writer Linda Dunscombe’s script chock full of double and triple crosses and characters that are all equally duplicitous which at times makes it a little confusing and means the potential for plot holes and implausibility are high and by the end it gets a little too clever for its own good.

King of Crime is one of those British films that has a raft of famous faces who don’t normally get big screen film roles so here we have Emmerdale’s Claire King, The Bill’s Chris Ellison in a blink or you’ll miss it cameo and Mark Wingett best known for Quadrophenia.  Added to this is Vas Blackwood as the terrorist Mr Mustaffa whose bursts of brutal violence should probably be more frightening than they actually are as Mr Mustaffa plays more like a character from Fonejacker. Blackwood is a decent actor though we’re never convinced of him as a villain which stretches right back to his villainous turn in  ‘Lock, Stock and Two Smoking Barrels’ where he is more pantomime villain than anything else (Frank Harper was a far more convincing and truly menacing presence in the film) and Blackwood is far more convincing  as more likeable characters as seen in the recent ‘Fanged Up’.

Directed by first time feature director Matt Gambell (who by day is a games designer) it’s a decent debut for a film shot on a tight budget and he balances it all well with more moments that succeed than those which don’t. King of Crime, though perhaps a little to similarly titled to the recent King of Thieves, is a decent Brit flick thriller which, though sags a little in places, has enough twists and turns to keep your interest.

Here the King of Crime trailer…….