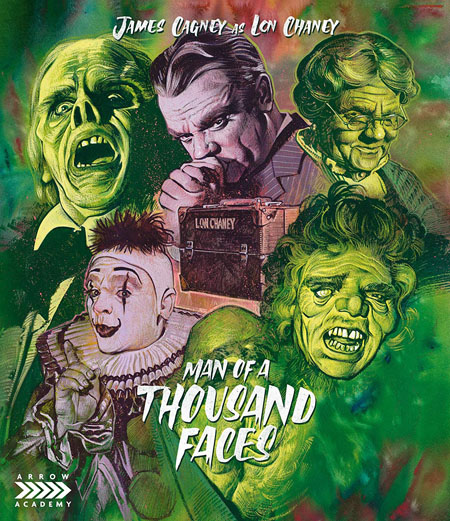 It’s rare for on screen legend to pay homage to another by portraying him on screen but that’s exactly what James Cagney did when he accepted the role of Lon Chaney in the 1957 film Man of a Thousand Faces. Chaney was an actor who had appeared in dozens of silent films including an early version of Oliver Twist but really made his name in horror. He starred in the title roles of The Hunchback of Notre Dame and The Phantom of the Opera both of which cemented his reputation as not only a great actor of the silent genre but also a master of make-up. He managed to transform himself into grotesque characters which made him unrecognizable yet still managing to make them sympathetic . His ability to transform himself with make-up of his own design earned him the nickname of Man of a Thousand Faces.

Yet despite his success his private life was wrecked with hardship and heartache. He grew up in poverty earning a meagre living as a vaudeville clown before hitting Hollywood stardom yet his private life he preferred to keep as such having been married twice. A heavy smoker he died young at only 47 years old in 1930 and Cagney who played him the film was a couple of decades older than him at the age Chaney was in the film.  Man of a Thousand Faces is a great biopic earning an Oscar nomination for Best Screenplay and the film’s success revived interest in Chaney’s film career. Cagney looked nothing like Chaney but his performance here is great and different from the gangster roles for which he had made his name and after this he would only make nine more films before his own death in 1986 and arguably this was his last really great film.

The Man of a Thousand Faces disc has been restored from the original negative in high definition and has a new commentary from film historian Tim Lucas.There’s also the usual insightful retrospective of Chaney’s career by Kim Newman and there’s also the film trailer and an illustrated booklet by a BFI historian.