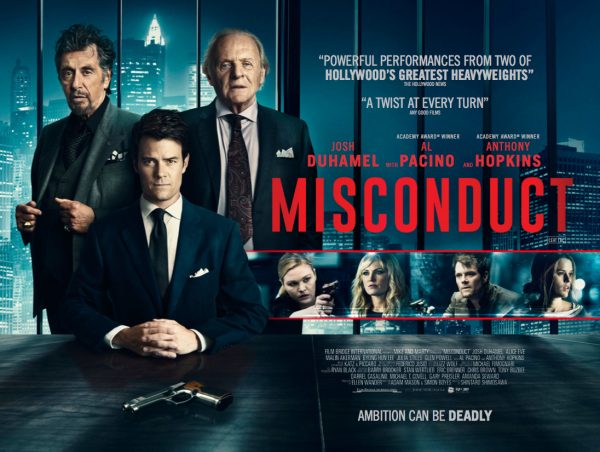 The films ‘Mischief’, ‘Misfits’ and ‘Misery’ all left the Editor confused because he thought they were all about the daughters of the Chief, Fits & Ery family Worse still was ‘Les Miserables which he thought was about the gay daughter of the Erables family. Frankly he’s an idiot and the new release ‘Misconduct’ will leave him even more confused because it’s one of those films that is chock full of twists.

With lawyer Ben Cahill (Josh Duhamel) going through marriage difficulties he bumps into an old flame Emily Hynes (Malin Akerman)who has taken umbrage at being ignored by her sugar daddy Arthur Denning , the billionaire  CEO of a pharmaceutical company played in typical gruff style by Anthony Hopkins. As an act of revenge Hynes has got her hands on a load of confidential data on a USB stick that will incriminate Hopkins company in dodgy drug tests on products that are now on the market and she hands it all over to Cahill who sees it as his chance to make a name for himself  with a high profile legal firm led by Al Pacino played with typical melodramatic flourishes which mercifully fall short of full on HOO-HA showboating. He’s only too keen to take on the case as the firm lost a prosecution against Hopkins firm and Pacino is still smarting from the loss.  All goes smoothly until Hynes turns up dead and Duhamel becomes the suspect on the run and then the plot really goes into overdrive in its efforts to pull the rug from under your feet.

Despite Duhamel being the lead the real sell of the film is its two stars and this is the first time they’ve been paired together though much like ‘Heat’ they only really share one scene together and its impact is not anywhere near as impressive as Pacino’s was with DeNiro in that film.  At their best both are great actors but here they are coasting and its serves only to remind that ‘Silence of the Lambs’ and ‘Heat’ were a long time ago and there’s a sense that the scriptwriters are clearly having a dig when they give Pacino the line, ‘Please pardon the theatrics’. Duhamel as the lawyer is adequate though as a criminal lawyer he’s forensically clueless and Julia Styles as Hopkins personal  investigator is equally hopeless when it comes to covert skills. Akerman once again plays a sexually voracious, hard nosed woman but best is Alice Eve as the troubled wife.

But the script revolves around major twists and there’s a twist at every turn which from the moment it’s mentioned that Hynes tried to commit suicide you know it’s going to be one of those films. Too much is based on coincidence and the twists pile up with some working better than others and, by the end especially, it’s just one twist too far. At one point Pacino quotes that lovable old genocidal maniac Stalin, ‘It’s better to go too far than not far enough’ but when it comes to this film he’d be wrong.