The best poet Laureate that Britain never had was Philip Larkin whose infamous poem ‘This be the verse’ neatly sums up ‘Mom& Dad’. It’s opening lines, ‘They f**k you up, your mum and dad, They may not mean to, but they do’, is never more true than here except they do far worse because they’re out to murder their own children. What do you expect when it stars Nicolas Cage?

Opening with a 70’s style montage of characters with ropey synthesizer music this has all the feel of a kitsch sci-fi film with its only giveaway being the current trend for showing phone texts on screen.

With Selma Blair and Nicolas Cage respectively as Mom and Dad to two teen children Carly (Anne Winters) & Josh (Zackary Arthur) they are the everyday American family going about their everyday lives. However underlying all of this is an increasing sense of unease that not all is at is should be which all comes to a head at the school gates in one of the films set pieces. It’s a bravura bonkers bombshell as the parents turn into a baying murderous clan who break through the gates and chase down their children slaughtering them in the process.  Carly escapes with her friend a phenomenally slutty Riley (Olivia Crocicchia) and rushes home realising that her little brother is alone and in danger. It’s the siblings hiding and trying to protect themselves that takes up the second half of the film as the children lock themselves in the basement as their now psychopathic parents try to break in.

For fans of Nicolas Cage this is the latest in an increasingly long list of looney performances with Southern Fury being a notable moment of excess and he goes full tilt twisted as best seen when he demolishes a pool table whist reciting the hokey-cokey. It all gets demented and there’s only one momentary pause to the mayhem where both parents reflect on what their expectations were when young with their whole life in front of them.  It’s about the only moment when you can identify with them which is perhaps the problem with the premise of the film. 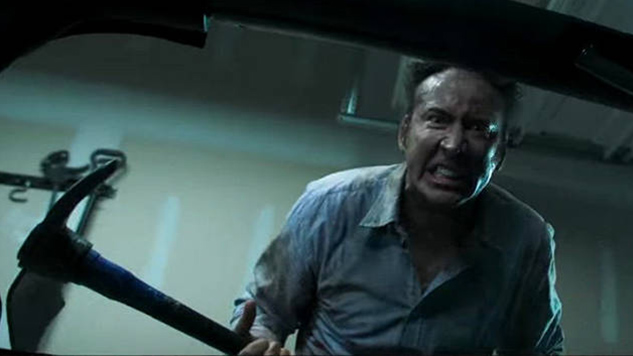 Both children are likeable enough and familicide is a pretty bleak prospect for any parent usually driven there by acrimonious divorce where a mother usually prevents the father from any rightful access to his children. But as entertainment this is intended as the bleakest of satire. As a horror it pulls back from the brutality and as a satire its sometimes a little too tasteless notably a scene with a newborn baby, a newly murder motivated mother and a flock of fathers eyeing up their babies in cots. A cult film in the making this none the less will divide audiences as its both unsatisfying and frustrating especially its ends which reeks of either having run out of ideas or money.

Like a cross between Night of the Living Dead and Home Alone with a twist Mon and Dad is destined for cult status.