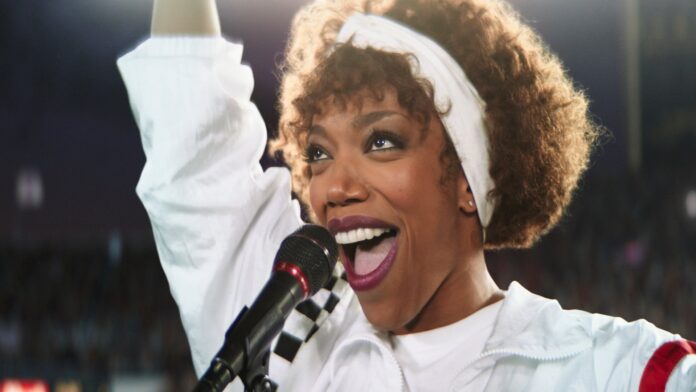 The tragic decline in the supremely gifted singer Whitney Houston is well known and was well documented in 2018’s film, ‘Whitney’ from Oscar winner director Kevin MacDonald but now we have a dramatized story of her life with Naomi Ackie as the singer. With the the film starting with her last televised performance we rewind to her singing at church with her mother pushing her voice to its peak before a record company boss Clive Davis (a likeable Stanley Tucci) signs her up and begins a stretch of seven consecutive number one singles that beats both The Beatles and Elvis. But as is well known it will all come at a price that it’s a wonder the filmmakers didn’t use her song ‘The Greatest Love of All’ because as is made clear here that love was for drugs first glimpsed when she partakes of her brothers bong in his bedroom during a furious argument their parents are having.

I Wanna Dance with Somebody doesn’t shy away from her increasing drug dependency, how could it when her shambolic performances later in her career showed that she was clearly not getting high on the elixir of life and self-styled bad boy and future husband Bobbi Brown was as much to contribute for her downfall combined with her father, the manager of her company, who himself regarded his daughter as his own personal cash dispenser. It was only her secret girlfriend Robyn (Nafessa Williams) that could see the damage that Houston’s toxic marriage to talent vacuum Bobbi Brown was having on her life and a scene where Robyn and Brown squabble over taking care of the exhausted singer with Brown pulling rank because he was her husband that it was inevitably going to end badly.

The film does omit any mention of her brother’s negative effect on their sister too and really the only decent man she had in her life was Davis but right from the start he made it clear he was there to guide her career not wanting to be any sort of life coach to her until its becomes necessary for him to try and intervene although in the 2018 documentary where he claims to have had no knowledge of her drug dependency whereas here Tucci’s Davis confronts her head on about it. Her life story is well known and there is nothing new revealed here and the revelation in the 2018 documentary that she was molested by a family member is one of several omissions.

Rami Malek at the World premiere of Bohemian Rhapsody

Houston was undoubtedly a gifted performer with a heavenly voice who squandered her talent on drugs and a parasitical husband who was eminently unsuitable to be any part of her life or indeed anyone’s and frankly would contribute more to the world as a fertilizer if only he could be persuaded to throw himself into a wood chipper.  British actress Naomi Ackie puts in an excellent performance but even at a mammoth two and a half hours I Wanna Dance with Somebody whisks  through her life and its significant and well publicized episodes as a sort of greatest hits TV movie, a criticism levelled at Bohemian Rhapsody which was also written by Anthony McCarten. Director Kasi Lemmons handling of the material  is pedestrian as is the unimaginative films title whereas, ‘From Gospel to Gak’ would at least been a more honest and appropriate title

Watch the I Wanna Dance With Somebody trailer HERE