The fact that, bar Joey Essex,  there’s precious few mentally disabled people given the opportunity on television these days but directors Tyler Nilson and Michael Schwartz have written and directed Peanut Butter Falcon, a film with a lead role specifically for a Down’s Syndrome actor and for once it’s not an able bodied actor looking for a nod during awards season. Here they have Zak Gottsagenan, a Downs Syndrome actor who plays Zak trapped in a prison cell of a care home who takes every opportunity to escape but always found and now accordingly classified as a ’flight risk’. And when he finally does escape, seemingly for good this time, the task of finding him is given to his care worker Eleanor (Dakota Johnson) who really does care.

Thrown into the mix is Tyler (Shia Labeouf) a shrimp fisherman recently fired and on the run from a pair of irate fisherman whose equipment he’s set light to. It’s when Tyler affects an escape from them that he  finds Zak on board his ramshackle boat. For both  it’s the start of an unlikely friendship as the pair go on a road trip with Tyler agreeing to take Zak to a wrestling school in deepest Florida run by ex-celebrity wrestler Salt Water Redneck,  played by a hugely enjoyable Thomas Haden Church. 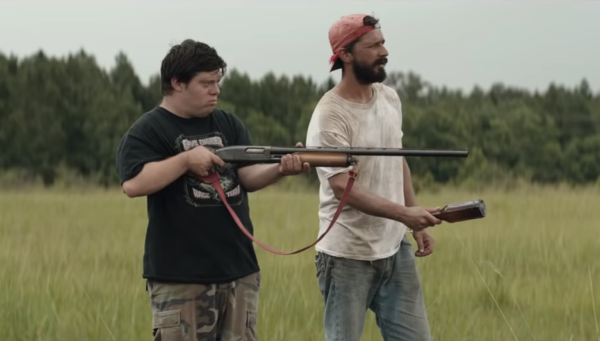 Peanut Butter Falcon has little in the way of surprises for what is ultimately a mismatched buddy-buddy road movie but is really about the value of belonging with Zak just wanting a family of his own and finding it with Tyler who himself is alienated from his own family and Eleanor who is widowed and in them he finds a surrogate mother and father. For  Labeouf it’s another determined to distance himself from the Hollywood franchise movies he made his name in. The same goes for Johnson too and  Gottsagenan is utterly endearing as the self proclaimed Peanut Butter Falcon, the wrestling moniker he gives himself.

Though there are script moments that lack credibility (the manager of the home doesn’t want to report what is a high risk missing person to police, Eleanor manages to track Zak more by coincidence than anything else, and there’s no real reason why Tyler doesn’t hand him over to Eleanor when he can) but these are minor quibbles in what is a beautifully underplayed low budget independent film which is worth looking out for.