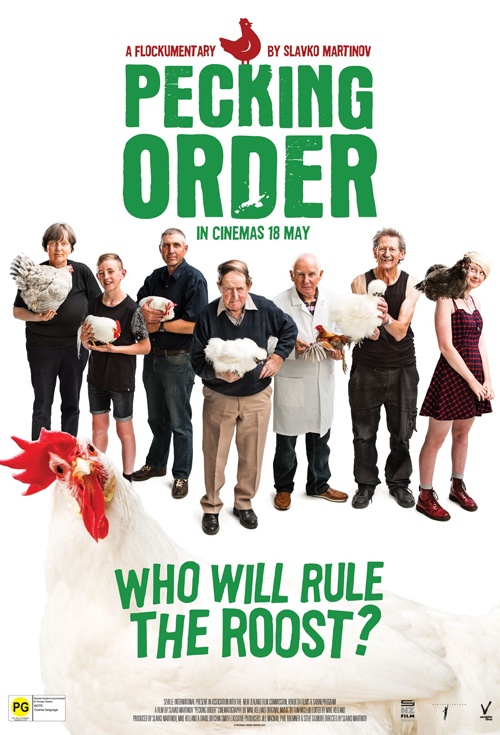 For many a cinema released  documentary about New Zealand  chicken breeders is hardly what anyone would eggs-pect (‘stop it!’– Ed) but ‘Pecking Order’ is hardly going to fowl up (‘Not telling you again!‘ – Ed) a nights viewing and in places this is clucking hilarious (‘You’re fired!’- Ed).

This is only the second documentary from director Slavko Martinov and at first glance he seems to have chosen a subject matter that would appear impossible to make a 90 minute documentary of any interest. How wrong you’d be as he focuses on a club of kiwi poultry breeders that incredibly has been around for 150 years and is rife with infighting after the death of its chairman and some of its members are up in arms about the elderly and frankly almost dictatorial new and self appointed chairman barking, ‘Order! Order!’ at their annual AGM as the dissent against him escalates.  It’s a pretty disparate bunch which stretches across all ages including the mullet haired adolescent  and his meek but dedicated father, the lonely man whose life is his birds, the stroppy pensioner and would be kingmaker trying to overthrow the chairman and the teenage girl who treats her hens like pets. All life is here and the chicken club politics, as they prepare for their 150th anniversary, is one of the delights of the film. All have their moments and the new chairman is wonderfully and unintentionally hilarious as he bitterly tries to protect his position which threatens to tear the club apart.

It’s also an insight into a hitherto unknown world for many of us with its members obsessed about their fowl determined to exhibit the perfect cock (‘STOP! STOP! STOP!’ – Ed) at the annual championship. It’s something of an eye opener that grown men have dedicated their lives to what makes the perfect bird (‘don’t even dare say it!’ – Ed) to such a degree that there is an internationally recognised book written by an obsessive bird expert on what makes the perfect prize winner.  In fact at times there’s a feeling that this surely must be a mockumentary but that is quickly overcome  because as endearingly and apparently benevolent as the members are its also quite shocking as to how unemotional they are about despatching with the birds to make a meal if they’re not up to prize winning standards.

The film culminates with the annual national competition where the members compete with other breeders from around New Zealand and where the issue of the club chairman comes to a head. It’s all wonderfully surreal and is an insight into an world of obsessive’s  with the only surprise being that it’s not sponsored by KFC.  Though a little slow to start this is utterly warm and as charming as anything you’ll see this year.

Hammer to fall? – Armie Hammer’s career after those allegations…….