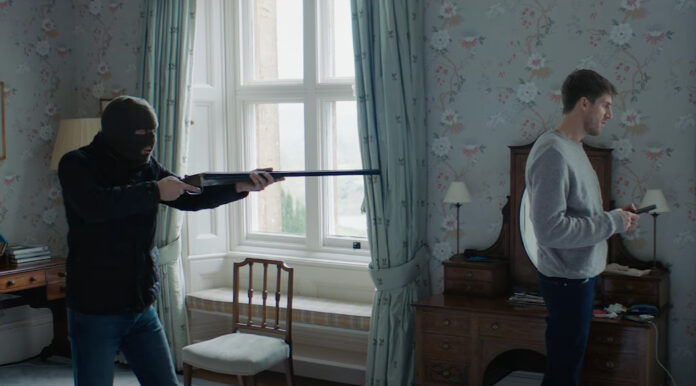 Pretty much everyone has had to endure the Gap Year Goon, you know, the one who returns to the UK and then insists on eating only with his hands as ‘that’s how you’re meant to eat’  or  worse still regales you with stories of what the ‘real’ people of whatever country they’ve been to are really like. Bizarrely despite all their woke-dom none of them seem to visit central African countries presumably because stories about eating hummus from a the skull of a child soldier doesn’t hold quite the same appeal as bungee jumping off a national monument. But we digress ….at the centre of All My Friends Hate Me is Pete (Tom Stourton) a refugee worker and boy, does he like going on about it to his friends when they all meet up at the country pile of one of their parents for his birthday.

After eight years Pete’s outlook on life has changed but it seems that his college crew haven’t progressed much beyond their student years. “I guess I thought everyone would’ve grown up a little more,” he confesses to absent girlfriend Sonia (Charly Clive) who he intends to propose to. George (Joshua McGuire) whose parents house it is has married Fig (Georgina Campbell) and both still love the party life, Archie (Graham Dickson) is the toff with a taste for Class A drugs and an idea for a money making app that is clear to all but him has all the appeal of shaking hands with Prince Andrew immediately after he’s been to one of Jeffrey Epstein’s parties. And then there’s Claire (Antonia Clarke) an ex-girlfriend of Pete’s who took her break up with him so badly she allegedly tried to commit suicide. Pete’s somewhat self-absorbed outlook on life finds him not even enquiring as to what his friends have been doing  in the intervening years and their disinterest in his charity work is exacerbated by the friends bringing along Henry (Dustin Demri-Burns) one of the locals they bumped into at the local pub who they have invited back to the house for the weekend party.

Pete’s college nickname was Skipper because he was, ’the captain of the party’ but he’s soon finds that he’s lucky to even be considered the cabin boy now. Henry is the party animal that the rest of them want and he becomes the centre of attention rather than Pete which immediately grates on him. He soon finds his own stories of working with refugees rapidly side lined and ignored in favour of Henry’s anecdotes and behaviour which they all love. And yet there’s something about Henry which is unnerving as he seems a little too knowledgeable about Pete’s life and its hardly help Pete’s unease when Henry takes out a pocketbook and makes notes seemingly about what Pete has just said or done. Increasingly angry and growing ever more paranoid it’s all going to come to a head on the final night which it does in a spectacularly awkward wince inducing roast that quickly goes awry.

Co-written by Tom Stourton and Tom Palmer this has tonal changes that wrong foot you. Right from the light hearted romantic opening scene the film pulls the rug with the title in blood red letters filling the screening to a blaring soundtrack accompaniment. Is this a horror or a comedy? What is certain is that it’s something of a social nightmare for Tom with the nagging fear that his friends are not really ‘his sort of people’ anymore and the scenes crackle with ambiguous dialogue and silent moments filled with glances and actions that that Pete can interpret in a number of ways.

At only 97 minutes All My Friends Hate Me keeps things moving along and examines that college reunion which dissects the fact that the college person is not the person you are today. This is both gloriously mean spirited and insightful too leaving viewers wanting to re-consider any college reunion.

Watch the  All My Friends Hate Me hate me trailer HERE