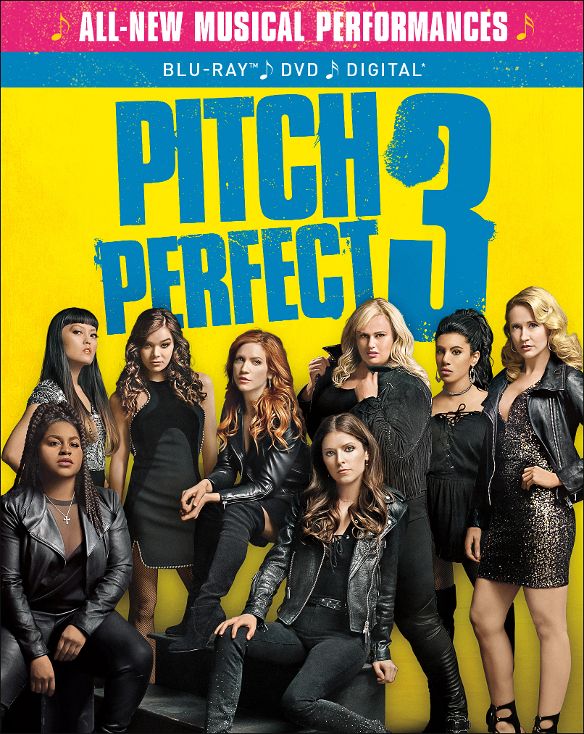 Pitch Perfect 3 can be added to the films with the actors trained at the Dick Van Dyke school of ropey accents with their latest alumni being the normally reliable John Lithgow. Over the years he’s shown how versatile he is from comedy (excluding last years Daddy’s Home 2) to  his work in Brian dePalma’s thrillers (Obsession, Blow Out, Raising Cain). But here he plays Fat Amy (Rebel Wilson) estranged Dad with a shaky Australian accent admittedly its nowhere near as bad as Don Cheadle’s cockney accent in Oceans 12.

Trilogy’s are notoriously difficult to get all films right and Pitch Perfect 3 was no different. With the all girl a capella group now having left college and each with their own careers or in many of their cases lack of careers we find then performing Britney Spears ‘Toxic’ on a luxury boat. But all is not as it seems as the film winds back to how and why they are there in the first place. It all centres around the group reforming to win a competition to entertain the US troops.   The group are followed by the two commentators brilliantly played by Elizabeth Banks & John Michael Higgins who are awkwardly shoe horned in as documentary makers and it’s a shame that they’ve been reduced to this because they are undoubtedly one of the highlights of the franchise especially in the second film. Please give them their own film! They are a riot of fun whenever they’re on screen looking as though they’ve been given free rein to ad lib some deliciously inappropriate comments. .

Pitch Perfect 3 is very much an all girl affair with its huge cast, a female writer (Kay Cannon)  and a female director, Trish Sie, making her first feature debut and is one of those films that is ideal for an girls night in with a big bottle of white wine and endless chocolate.

Running at a slim 93 minutes it still struggles to fill out the time and Anna Kendrick (The Accountant) remains a likeable lead. The film attempts to transform Rebel Wilson into an action star and is  given many of the best lines including an unsurprisingly smutty but funny joke about a competing all girl bands called Evermoist.

The disc has been filled out with a wide range of extras of varying quality. A decent commentary from director and producer have some interesting tit bits and a ‘Hollywood of the South’ is an intriguing  featurette about the European sets which were all built in Atlanta and could have benefitted from being longer and in more depth. That’s the problem with many of the extras in that many and very brief and do consequently feel like space fillers including a gag  reel where the actresses laugh for no real reason, a deleted scene with Rebel Wilson which even as you watch it you wonder why it was even shot as it has no discernible purpose. There’s also ‘The Girls’ with the obligatory flattery from the cast about the director, a 2 minute filler about Lithgow’s accent, a riff off feature about the bands singing at each other, a piece on Rebel’s action scenes and a featurette on DJ Kahlid, apparently is a big noise in the music industry who seems to believe his own superstar DJ hype whereas what he actually looks like is a kebab shop owner in a bargain bin tracksuit. The feature on the a cappella songs is decent enough with their versions of Toxic and especially George Michael’s Freedom sung by the group in the last scene which was also the last scene the crew shot and was clearly extremely emotional for all the cast.

Many of these are so brief as to be blink and you’ve missed it and we would like to have seen a longer piece on John & Gail the commentators with Banks and Higgins ad-libbing and there must have been a heap of stuff that ended up on the cutting room floor that was probably unable to be put on a 12A disc.