Gerard Butler’s new action thriller ‘Plane’ finds him as a pilot caught in a war zone after he’s forced to crash land his commercial aircraft during a terrible storm. As the airline learns of the flight’s emergency status, its senior executives convene in a situation room, where a former special forces operative, now corporate trouble shooter named Scarsdale, played by Tony Goldwyn, presides. “I solve the problems you can’t solve,” he tells the chastened execs and for the film that involves real life special forces operatives turned actors. Scarsdale’s first order of business is to employ some “private assets” – mercenaries – to travel to Jolo Island and attempt to rescue the crash survivors.

Goldwyn says the role resonated with him because, he describes, “I’ve long been fascinated with extra-government security operations. Some call them mercenaries or contract soldiers. There are several very successful companies that are unknown to most but do a lot of work for the U.S. government and the C.I.A., and even operate at the behest of major corporations around the world.” Goldwyn’s knowledge of this world pre-dated his work on PLANE, he explains: “I’d been working on a project that involved that kind of mercenary group, so when I was asked to play Scarsdale, I’d already done a lot of reading on the subject. “So, I had an immediate understanding of Scarsdale’s job and realm of expertise.” The actor’s earlier research had also revealed that many operatives leaned away from stereotypical military bearing. “I wanted to portray Scarsdale as a successful businessman in a nice suit, so you would have no clue of his special ops credentials.”

PLANE’s international cast also features several special forces operatives turned actors. Remi Adeleke, a former Navy SEAL, portrays Shellback, the leader of a team of mercenaries that the airline tasks with rescuing the downed passengers. Adeleke elaborates on the role, for which, unsurprisingly, he feels an affinity. “These guys jump in and provide tactical or medical care to crash survivors or other wounded operatives. The character resonated with me because I had been SEAL team medic. So, there was that connecting point, as well as Shellback being a battle-hardened, fearless warrior, who recognizes that this mission is a bit tricky. “The odds are stacked against the mercenaries,” Adeleke continues, “but Shellback knows they can, somehow, pull it off.” Another member of the elite team, Jim Lake, is portrayed by former Navy SEAL Pete Scobell who recalls the circumstances that led him and Adeleke to join the PLANE unit. “Stunt coordinator James Churchman was looking for actors and stunt people who had military operational experience to play the mercenaries. My character, Lake, plus Shellback and the other mercenaries are a part of the world of military contracting, who step in when the government can’t.” Scobell says he appreciated the story’s depiction of its central figure – a civilian who somehow finds the strength within to make sure his passengers are safe. “I love this story because Gerard’s character is desperate, trying to get home, and do the right thing for his passengers and crew. It shows that there’s no limit to what someone who’s determined to fulfill a mission can do. It’s all about pure grit, desperation, and tenacity. Gerry plays that character beautifully, and it was always fun to watch.” 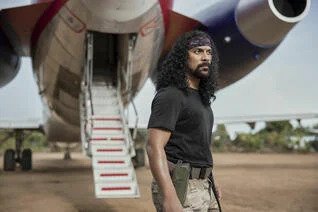 Top stuntman and fight coordinator Evan Dane Taylor (The Punisher, Daredevil) takes on the role of Datu Junmar, the leader of a murderous band of pirates that kidnaps the stranded passengers and crew, with plans to hold them for ransom and, possibly, execution. Taylor recalls what led him to the role. “I was a little surprised that our stunt coordinator, Jim Churchman, approached me to play Junmar. “He explained that the production wanted someone who can act and bring out Junmar’s ferocity, as well as do his own stunts. Lucky for me, I was available; I really wanted the part! “My bread and butter is stunt work – firing weapons, driving – and all of that was utilized in the shoot,” he continues. “Most of all, we wanted Junmar to be the epitome of evil.” In addition to performing his own stunts, Taylor mastered another language for the role – Tagalog – spoken by many of the militia and pirates of that region. He was assisted in that formidable task by his …mother. “I would Zoom with her for over two hours, going over Tagalog lessons, followed by work with my acting coach,” Taylor remembers

With the real life special forces operatives turned actors now involved in front of camera proved an explosive mix for actors, stuntmen and director and Plane has already performed well in the US with rumours of a sequel already circulating.

How a run down cinema was transformed for Sam Mendes, ‘Empire of Light’