With its synopsis stating that it was set against a background of uncontrolled immigration, burgeoning drug use and corrupt politicians audiences were astonished to find that Sicario was not set in the UK but actually on the US/Mexico border. At its centre was Emily Blunt’s FBI agent seconded to a covert unit that uses the dark arts of law enforcement and looked on almost helpless as she quickly saw that her good guys were as bad as the bad guys. Sicario 2 sees her absent along with director Dennis Villeneuve & DoP Roger Deakins. Josh Brolin’s murky covert operative and his widowed attorney and now vengeful hitman Benecio Del Toro return again to fight the Mexican drug cartels once more. Here though its people they traffic which includes would be terrorists moved via Mexico into the US and Sicario 2 has a truly horrifying suicide bombing in a supermarket that’s all too plausible.

Brolin is hired to stir up a war between the cartels and starts off with assassinating their head  lawyer followed by the kidnapping of a drugs lords 11 year old daughter, an almost feral fighting machine who we first see battering another  girl in the school yard and arrogantly challenging the impotent head teacher to expel her from the private school.  She soon finds her tough persona punctured and woefully out of her depth as she’s kidnapped where the bullets fly and the bodies drop around her. Director Stefano Sollima (Gomorrah) has shot brutal sequences and the daughter would be entitled to claim PTSD because what she goes through is usually suffered only by army veterans and anyone who has had to put up with our Deputy Editor’s ex-wife. 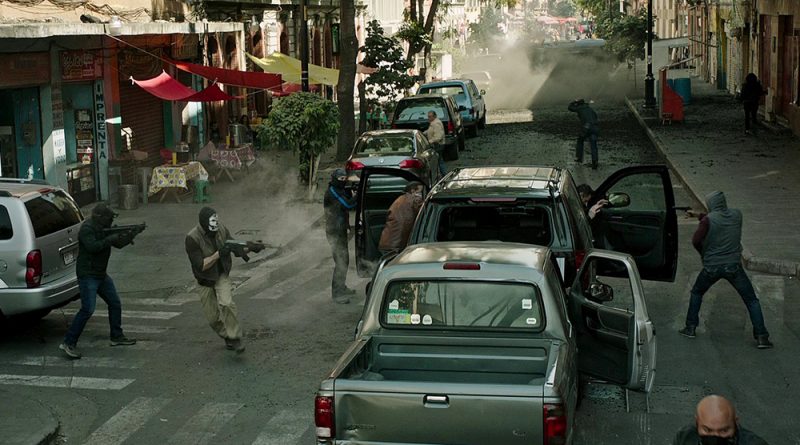 It’s when their covert op goes awry and orders from on high are to eliminate her to cover up the mess and its then that Del Toro steps in. Having lost his own daughter to the drug cartels in the first film he becomes an unlikely surrogate father protecting her from opposing cartels and he tries to get her to the safety of the border alive.

Sicario had been a moderate but critical success when it was released in 2015 and was one of our films of that year. Writer Taylor Sheridan has maintained the brutality with everyone a bad guy but it’s that removal of Blunt’s character that gave the original film its objectivity about what she saw was being done in the name of law enforcement.  Sicario 2 is brutally nihilistic as embodied by Brolin and Sheridan’s script has used similar beats to the first film – the moral ambiguity, the barbarism and the periphery character who becomes pivotal to name a few.

Sicario 2 has no moments as defining as the shoot out in the congested border crossing as in the first film though the suicide bombing in the supermarket is pretty numbing. Not as good as the original, Sicario 2 is still one of the best thrillers we’re likely to see this year despite one highly improbable moment with one of the lead characters. With its grimly ominous score and a great performance by Isabela Moner as the kidnapped daughter Sicario 2 appears to be the middle film in an intended trilogy and for the third part we can’t wait.