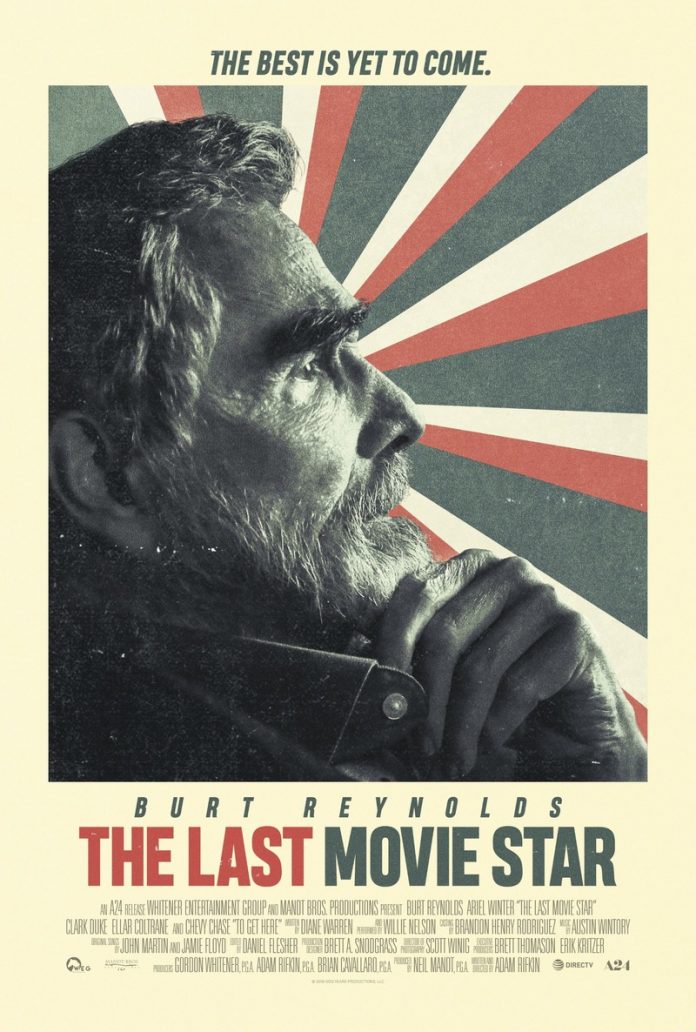 Originally titled ‘Dog Years’ it was changed to a far more appropriate ‘The Last Movie Star’ because it’s a film that writer director Adam Rifkin wrote specifically for Burt Reynolds who plays the lead role of Vic Edwards, an elderly and faded movie star coping with the fact that his glory days are well behind him. It fits Burt Reynolds career trajectory like a glove and it’s a bold move by Rifkin to have even approached Reynolds with such a script whose arrogance is lampooned by Saturday Night Live’s Jeopardy sketches with Norm MacDonald’s uncannily accurate impersonation of Reynolds at the height of his 70’s swagger .

From the late seventies to the early eighties Reynolds was the world’s No 1 movie star with back to back hits that had included Smokey and the Bandit and its sequel, Hooper and The Cannonball Run – all big office hits with Reynolds almost laughing his way through the low brow crowd pleasers that they were but a world away from films that showed that at his best he could turn in a decent performance notably in Deliverance before his films had him almost parodying himself.

So The Last Movie Star though perhaps not accurately titled (Clint Eastwood was to take that mantle for a few years after him before Schwarzenegger) is again a knowingly aware film by Burt Reynolds but for all the right reasons. Starting with a big close up of his face sadly staring out at us only for the camera to pull out to reveal that he’s at the vet with his only companion, his pet dog, that, much like his master, is on his last legs.

Out of the blue he receives an invite to fly to Nashville for a film festival to receive a life time achievement award only to find that the last hurrah he had hoped for at a glitzy star studded film gala is actually a fan run festival projecting his films onto a wall in a local bar. His assistant turns out to be the organizers sister  Lil McDougal (Ariel Winter) in cut off shorts, crop top, nasal piercing and tattoos constantly arguing on the phone with her philandering boy friend who she picks up Reynolds in a beat up, filth infested car. Cannes it is not.

But from here the mismatched couple form an unlikely friendship as he decides to abandon the festival demanding that she take him to various places starting with the home where he grew up. This is one of those films where both characters go on a literal and metaphorical journey with each learning something about themselves and coming out at the end all the better for it. At times this is painfully sad  because Rifkin in two scenes has  cleverly though not always convincingly cut together Reynolds present day self speaking to himself in character in his old films (Smokey and the Bandit & Deliverance) about the way his life and career has gone and for Reynolds, who whose had his fair share of ups and downs notably a hideously messy divorce from Loni Andersson , must have raked up painful memories for him.

For Reynolds this is probably is his first decent performance in some years though admittedly he’s clearly playing himself and The Last Movie Star also uses footage from his TV appearances at the height of his fame and today he is a shadow of his former self. Tottering around on a walking stick, skin now showing the effects of too much surgery and still wearing a toupee that makes him look like a geriatric badger. ‘Youth is waste on the young’ is a truism here as he reflects on what could have been and the film is book ended with that same close up of Reynolds looking out to the audience this time with a smile on his face having come to terms with what he’s done. Old school stars are always of interest and at 82 years old Reynolds is no different and he’s joined here by Chevy Chase himself 75 years old but also with a less than enviable reputation for being a difficult man to work with and a career which peaked in the early eighties so it’s interesting that Rifkin has thrown in a line for him wanting a similar movie.

Here’s the trailer for The Last Movie Star…….