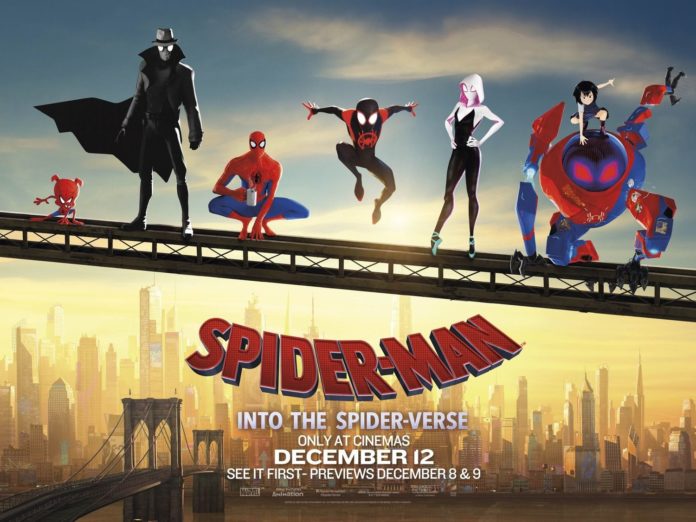 With Spiderman having started as a comic book then an animated TV series before blockbuster film franchise is now an animated blockbuster feature film in its latest incarnation Spiderman Into the Spiderverse. Co written by Phil Lord one of the directors ignominiously fired from Solo, he returns to his animation roots and fares far better with this. Some may roll their eyes at this being something of an origin story but this has got a great spin on it.

Miles Morals (Shameik Moore) is a black schoolboy with a cop for a father and a mum keen that he works hard at school. It’s undermined somewhat by Uncle Aaron (Mahashala Ali) who encourages Miles graffiti skills and one night takes him to disused underground sewers to practice his graffiti tag where the film adheres to Spiderman folk lore when he is bitten by a spider that gives him those spidey powers which he first discovers with his first fumbling attempts at flirting with schoolgirl Gwen Stacy (fans of the superhero will see where this is going as soon as they read that name). Ironically Miles is a big fan of the real life Spiderman who has been tragically killed early on in the film which features a terrifically fierce Green Goblin that’s far more impressive than any of the film incarnations.

The city is unwittingly under threat from a villain with a space time continuum collider that inadvertently creates a parallel universe and it’s here that the scripts spin on the origin story brings in other Spidermen. So we have the original Peter Parker / Spiderman as well as Gwen Stacy / Spider woman, Spider Noir (a 1930’s version of the superhero) , an anime version and most surreal of all Spider-Ham , basically a pig in a Spiderman costume.

With not one, not two but three directors and a script that at times is almost meta it could be a mess but actually this is one of the most satisfying of Spiderman films embracing its comic book origins brilliantly. This is a much more street wise version which should please fans and those not so familiar with the superheroes various permutations and storylines over the years. The film has moments which are pure comic book –an impossible to replicate in real life villain who is essentially a black square with a small face in it, a plethora of Spidermen and action sequences that would have had to be CGI in a live action film but here as animation are wholly in keeping with an animated film.

It’s a fitting testament to the late Stan Lee’s most famous superhero and the film has his last voice recording before he passed away earlier this year and it’s a poignant cameo with a fitting tribute to him in the credits. Often overshadow by Lee’s public persona it’s Steve Ditko who was the real genius behind the superhero  and Spiderman –Into the Spiderverse is a credit to him having passed away earlier this year also.

With a teaser for the film playing as the post credit sequence to Venom the film has been something of a gamble for the studio but Spiderman Into the Spiderverse rewards fabulously even if the title is a little clunky…… and yes there’s an end credit scene which is surreally amusing.

Here’s the Spiderman Into the Spiderverse trailer…….