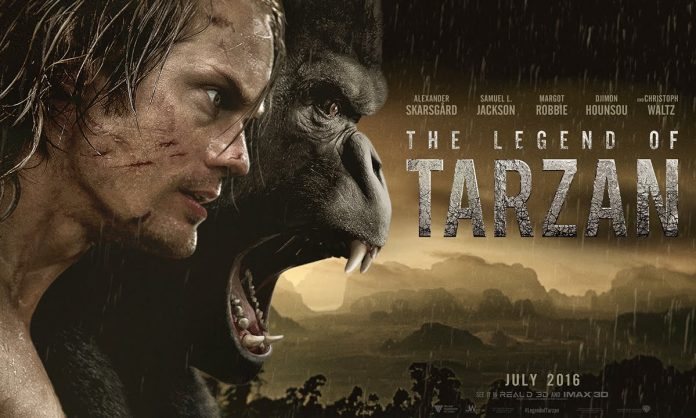 We were going to start off this review by saying that over the years we’ve had more Tarzan films than the Editors had free drinks at premiere’s but that would be ridiculous as there’s not been a million Tarzan films.  The last film was an animated version in 2013 and the other animated version was Disneys’ in 1999.  Before that was Greystoke  and of course who could forget (try as you might) the infamous 1981 Bo Derek  version  which frankly was little more than an unexpurgated adult breast fest. For many it’s Johnny Weismuller in the classic black and white films that most people  associate with the role of the vine swinging yodel yelping king of the jungle with all manner of exploits which became ever more surreal (‘Tarzan and the Mermaids’ – yes, really!).  The latest version is a hugely budgeted  loosely based origin story with Alexander Skarsgard as the eponymous hero now back in London and living a more gentrified life rather than hanging around in his pants with apes.

With a bit of prologue that sets the background with the Belgium King owning the Congo but having run into debt and wanting to avoid a coup by his army he intends to plunder the region for its diamonds and minerals regardless of the  consequences to its indigenous people and it’s a ruthless Christoph Waltz who goes about doing his bidding strutting around in a colonial white suit like a menacing Man from Del Monte. So back in dear old Blighty Lord Greystoke aka Tarzan is pressed into returning to the Congo where he was raised with a miscast Samuel L Jackson as a Victorian businessman who try as he might still can’t quite hide his jive style of talk.  It’s a problem the film wrestles with in it’s portrayal of the tribes folk too because despite living in the wilds of the Congo they still speak perfect English. It also prompts the question as to how Tarzan learnt English as he was raised from a baby by the apes and we’ve yet to come across an ape with received pronunciation.  Inevitably  Tarzan’s wife Jane (Margot Robbie) is held hostage by Waltz and from hereonin its like a promo for the Chippendales with Swedish hunk Skarsgard stripped to the waist and glistening with sweat which is all fine and dandy for the female audience but for the male audience  Margot Robbie remains firmly buttoned up in her corset.

This is a lavishly mounted spectacle with lush landscapes beautifully shot especially a stunning animal stampede through a town and director David Yates’ pedigree in summer blockbusters is evident but this suffers from a muddled narrative which never really settles down as it leaps back and fore in time. Waltz is suavely sinister but Sam Jackson who seems to be in everything ever released is incongruous as the gentrified American suppressing his inner Tarantino and at one point struggles to contain his, ‘when you absolutely, positively have to kill everyone in the room’ speech from Jackie Brown. He’s clearly there for light relief but it all sits uneasily with the rest of the film in fact the funniest moment is a brief allusion to paedophile priests.  Skarsgard is physically right for the role but has little character and has all the expected tropes although the iconic yodel has an air of constipation about it and the apes apart from having raised Tarzan from birth also seem to have taught him close quarter martial arts fighting.  With CGI having moved on the need for men in ape suits are unnecessary and the apes are impressively rendered though are borderline psychotic . Perhaps what will draw most complaints is the portrayal of the tribesmen, which is nearly always a line of contention in Hollywood films and this is no different, who veer between either having graduated from British boarding schools to, in one early case, appearing to wear a chamois leather on his head

It’s a shame as this is a hugely budgeted film competently directed by David Yates who directed many of the Harry Potter films but like some of the films in that franchise this would have benefited from  a more linear narrative and the 3D adds nothing discernible benefit. There are some sequences which much like Jurassic Park – a film from which this lifts a scene – may be too intense for younger audiences and though there is something of a ‘boys own’ adventure aspect its been cleverly cast to appeal to different audiences.