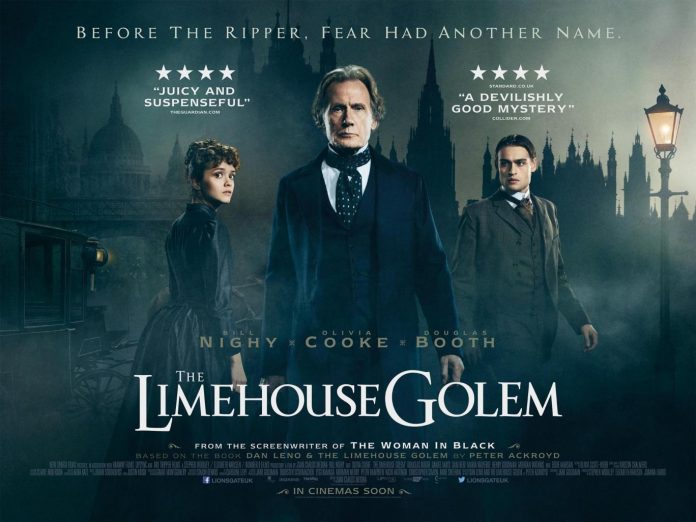 The Golem, as film fact fans will know, was a legendary clay figure bought to life by a Rabbi in order to save the Jewish community from persecution but which eventually goes on a murderous rampage and was first sen in a 1915 film. It’s the same creature which is presumed to be carrying out a series of extremely gruesome murders in London’s Limehouse area in the therefore appropriately titled The Limehouse Golem.  Bought in to solve the crimes is Inspector John Kidare played by the ever reliable Bill Nighy taking over a role that was originally to be played by the late Alan Rickman. The brutal slaughter of both men and women whose remains are eviscerated by the killer seem unsolveable if for no other reason than back in 1880 they were forensically clueless as seen in the aftermath of the first murder where all and sundry are seen tramping through the crime scene. It seems also that Nighy’s character has been set up for a fall by his senior officer knowing that the press are all over it and there is public outcry at the carnage for which Nighy will take the blame if it’s not solved.

Enter into all of this is Lizzi Cree (Olivia Cooke) an actress whose career is on the up and up but whose husband John ( Sam Reid) is envious of her success that is until he winds up dead too and she becomes the suspect. With the investigation unfolding it seems that he may have been the suspect for all the Limehouse murders and bit by bit Nighy uncovers a whole can of worms in screenwriter Jane Goldman’s adaptation of Peter Aykroyd’s novel which is not afraid to show the aftermath of some pretty gruesome murders. Grim, graphic and gory this also explored other unsavoury aspects of the time with hints of homophobia, paedophilia, sado masochism and domestic violence. Sex is a regular subtext to what is going on in what is essentially a whodunit which has hints of ‘Seven’ about it. Goldman’s script wears its literary references on its sleeve even going as far as to have one character pick up a book and quote directly from it and the script has flashbacks as misdirection as to who the actual murdered might actually be and due to this device it seems at times that everyone could be a suspect

Book ended by Douglas Booth as actor Dan Leno in the theatre addressing the audience directly and he veers between slight campness to the occasional channelling of Michael Caine. Director Juan Carlos Medina has assembled a good cast with Nighy reliably good and Olivia Cooke matching him and Eddie Marsan as the theatre manager with an unsettling interest in his lead actresses and as a whodunit though there’s nothing we’ve not seen before except here some of the murders and their aftermath are graphic in their depiction and as Booth’s character catch phrase says. ‘Here we go again!’