Whether The 355 was to be about a numerically poor football managers team formation or that the 355 is the latest estimate of the number of children Boris Johnson has will never be know n but what it does feature is a bunch of female superspies going after a super weapon on a computer drive that’s fallen into the hands of a mercenaries.  And quite the weapon it is too,  able to knock planes from the skies and plunge cities into darkness and it’s all been devised by a South American drug dealers extraordinary teenage son – extraordinary in that he hasn’t spent his time locked in his bedroom wanking himself into a coma like any other teenage boy.  It’s a financier played by Jason Flemyng who coordinates a Call of Duty style attack on the dealers house in order to steal the computer drive yet it goes awry and the super weapon now becomes the object sought by every mercenary.

It’s left to US female spy Manson (Jessica Chastain) along with fellow spy and on/off boy friend Nick (Sebastian Stan) to go to Paris and intercept the device which about is to be covertly exchanged at a road side cafe. The quality of their spy work is immediately questionable when a French waitress is polite and smiles when spoken to by an American rather than the usual Gallic shrug which doesn’t arise their suspicions and what follows is one of several high octane action set pieces. But it’s the start of the computer drive being snatched by one group then another and travelling the world in the process as Mason teams up with old friend and computer expert Khadijah (Lupita Nyong’o) German spy Marie (Diane Kruger), psychologist Gracie (Penelope Cruz) and a Japanese computer expert Lim Mi (the improbably named Bingbing Fan whose siblings are, we’re guessing, Ceiling, Floor & Football).  Together they go after the gangs who are stealing the drive from each other ending in an auction room as a covert cover for a covert auction on the dark web. It soon becomes the girl gang against the boy gangs on a lethal level. 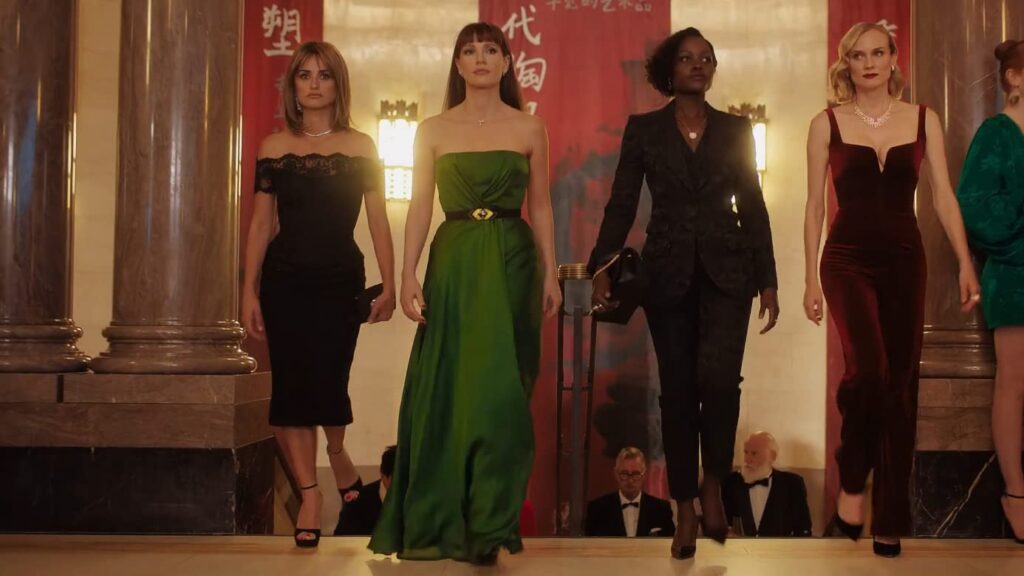 Numerous scenes of the women follow proving that when it comes to brutality they can match any man and at times the group of women have the appearance of the most psychotic hen party you’ve ever crossed paths though almost inevitably the ball busting is momentarily suspended for girlie glamour notably at a pre-auction party where Chastain’s hair suddenly doubles in length whereas Cruz’ has highlights which immediately disappear in subsequent scenes.

That the film never explains its title (it was the code number for a real life anonymous female US spy) is frustrating but directed by Simon Kinberg The 355 tries to do for female led actions films what Oceans 8 did for the heist movie but the action sequences , though well handled become a little generic and don’t attain the level of Charlize Theron in Atomic Blonde but Chastain and Kruger are the standouts …Kruger especially who gets the opportunity to demonstrate the multi lingual skills of the Europeans delivering lines in both French and English neither of which are her native language whereas us Brits have the belief that we can speak another language when abroad simply by raising our voices and ending every word with the letter O. With the rise of the #TimesUp movement there has been a huge increase in female led films and this firmly falls under that banner with many men mangled by the marauding mothers and together they make a kick ass quintet.