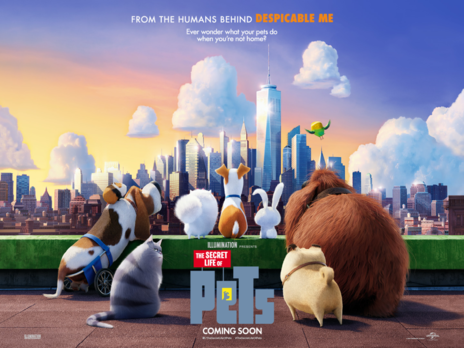 Having looked at Finding Dory and Zootopia we thought we’d have a brief look at the other likely Best Animated film contender,’The Secret Life of Pets’.

Director Chris Renaud has quickly established himself as a force to be reckoned with having directed The Lorax, both Despicable Me and Despicable Me 2 and in the process launching the hugely popular Minions on the world and in turn launching a billion dollar franchise for Universal studios.

It’s made him a bit of a heavyweight in animation and the idea for The Secret Life Of Pets came in 2012, after Chris Meledandri, founder of Illumination Entertainment bandied the idea,’What do pets do when their owners are not home?’

The Despicable Me franchise took up a significant number of years to develop and make and Renaud was keen to move onto something different but it was to be two years after that initial idea before he took on the project.  “It was fun to start thinking about a different set of characters, and to start developing a new world and a new story, (and) I love pets. I’ve had an animal in my life pretty consistently. The opportunity, particularly from an animation perspective, to really try to capture animals as they are was very exciting” he said.

So when Renaud began developing the project his direction to the design team was to have  as little anthropomorphisation as possible. “We tried to keep the animals on all fours and make their behaviour very believable,” he explains. “I hadn’t really seen it done before. I felt we could really explore the idea of the performance of these animals in a very naturalistic way, and of course we always tried to put a twist on it.”

The production’s other huge challenge was animating crowd scenes that featured many different species of animals.“The tricky part is, unlike a crowd of Minions, each of these characters has different body types and very distinct behaviour,” says Renaud. “You can’t animate a crocodile the way you would animate a tarantula. We’ve done a lot of stuff with human characters to date, but with a dog you’re not just animating the face – you’ve got ears and you’ve got a tail. There’s a different kind of body language that you have to master and make second nature. I think that was sort of a learning curve.”

The director used New York city as its backdrop which is easy if you’re based there hbut the film was made in France with many of team never having been to New York. Renuad however had lived there for some years. ‘……one of the fun challenges was policing the design and modelling of the city,” he says and French illustrator Jean-Jacques Sempé’s  used the covers of New Yorker magazine as the basis for the look of the city in the film.

“Eric Guillon, the production designer, used him as a reference very often. Sempé drew his covers so that the buildings were almost a vertical curtain, then he’d focus the illustration on these two little characters in the corner. We really tried to create this vertically scaled-up city. Partly because it makes it more beautiful, sort of like the Emerald City, but also to accentuate the scale of height as it relates to these little pets who are shorter than human beings; to try to force that perspective a bit,” says Renaud.

To date the film has taken over $873m worldwide. “People love their animals and I think the movie spoke to that.”

The Oscar nominations for best film will be announced soon.

Welcome to the Babylon party!…..how they shot the depraved party scene

How a run down cinema was transformed for Sam Mendes, ‘Empire...