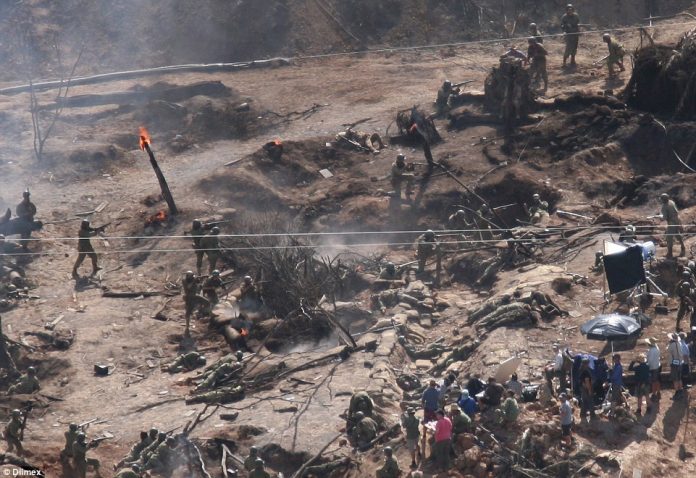 If you’ve been to see the Oscar nominated ‘Hacksaw Ridge’ you may still be reeling from the carnage of the battle scenes. What you also may not know is that it took 16 years for Mel Gibson to make the $40m film it’s budget being one of the problems as well as Gibson’s fall from grace not helping either.

And if you hadn’t heard of Desmond Doss before you were not alone. Producers Bill Mechanic and David Permut didn’t know who he was either.

As is now well known Doss was a Seventh-day Adventist who enlisted to serve in the Second World War but refused to carry a weapon, instead becoming a US Army medic at the centre of the ferocious Battle of Okinawa. Despite being the first conscientious objector to receive the Medal of Honor – the US’s highest military honour, awarded by the president to military personnel for acts of valour above and beyond the call of duty – after he saved the lives of an estimated 75 soldiers during the vicious conflict he was vehemently against seeing his story being filmed.

He knocked back countless number of big name Producers including Hal B Wallis, the producer of Casablanca and the 1969 version of True Grit, as well as super producer Darryl F Zanuck and also Audie Murphy who had himself been awarded the Medal of Honor.

It wasn’t until 2000, that Producer David Permut, (Face/Off), was told about Doss by a stuntman and decided to see if he could get the rights . “He was a very modest and humble man who never considered himself a hero,” says Permut. He wasn’t the only one to try and persuade him as Doss’s friends at the protective Seventh-day Adventist congregation had encouraged him to allow filmmaker Terry Benedict, to make a documentary: 2004’s The Conscientious Objector.

So Permut cleverly commissioned Benedict to write a first draft of Hacksaw Ridge, which was about Doss’s enrolling in the US Army and his perils in the Pacific. Producer and writer then showed the script to Pandemonium Films founder Bill Mechanic, who had just left Fox Filmed Entertainment after six years as chairman and he loved it so much he negotiated to buy life rights. In 2002 Pulitzer Prize winner Robert Schenkkan was bought into write further drafts and made the first of what would become three approaches to Mel Gibson, with whom he had made Braveheart.

“It seemed to me Desmond Doss and William Wallace are the same guy.One’s violent and one’s not violent, but they’re both men of principle who are prepared to die for what they believe in. It made sense to see if Mel was interested.” said Mechanic.

Unfortunately though Gibson’s company Icon liked the script they turned it down but Mechanic thensold Hacksaw Ridge to Walden Media in 2003. However the project sat with the company for ten years at Philip Anschutz’s faith-based, family-friendly company.

The problem then was when the project was greenlit with the budget pared down to $40m and Mechanic found a director (who eventually quit). Instead he hired Randall Wallace to write another draft of the script which is where the film hit a problem because while Mechanic, Permut and Schenkkan were keen to highlight Doss’s faith, they did not want to dilute the war scenes and blanched when Anschutz proposed a PG-13 version.

“When I sold it to [Walden], it was Saving Private Ryan – the most violent battle in the Pacific [where some] 300,000 people died. So I didn’t understand how it could be a PG-13. [Doss] was a medic and you have to see him tend to people to see if he believes in what he believes in. Will he pick up the gun or not?” said Mechanic. It put the film into turnaround with Mechanic on the verge of abandoning the project until he could buy it back for himself in 2014. This was the same year that Gibson agreed to direct.

“It went to my heart. I found it a very moving and compelling story. It ticked all the boxes, and I climbed aboard willingly with Bill and David.” admitted Gibson. However his production company Icon would not finance the film which left with Mechanic the problem of finding the money again thinking he might get it from Australia and make it an independent film.

Says Mechanic, “I flew to Australia to make sure I could qualify the picture with a subsidy and the only way I could do this was for it to qualify as an Australian picture. Because I’d made two movies there, I had the support of the government [and] they deemed Mel to be Australian. Screen Australia approved, which allowed us to go for foreign sales. Any doubts about Andrew (Garfield) and the noise surrounding Mel [after his DUI arrest and notorious outbursts in the mid-2000s] went away. Cross Creek Pictures came on board to put in the equity and that was it. IM Global had been chasing the project [as sales agent]. I’d met with Stuart [Ford] and he liked the project.”

Pre-production on the film lasted for three months and eventually filmed for 59 days in and around Sydney in late 2015. However filming did go over schedule with Gibson and Mechanic paying for it themselves.

At $40m the budget was extremely low for such a film. “Braveheart was $70m and it’s incredible that 23 years later we had to make this for that [amount],” says Mechanic.

“We were under the gun and we had to go as fast as I’ve ever gone,” adds Gibson.

“Mel might be in the tent but, if something wasn’t working, he’d run out, throw himself on the ground and demonstrate what he wanted,” says effects supervisor Chris Godfrey. “It’s hard to say no to a man who is willing to literally throw himself into the action for his art.”

The battle scenes are astonishing. “It was ultimately very do-able,” says the director, who took pains to stitch together the “chaos and the madness” with a through-line that allowed viewers to follow the characters. I wanted the audience to get put in a foxhole a little bit so they could appreciate what it would take for a guy to stay up there and do what he did.”

The 350-ft Maeda Escarpment, over which Doss winched dozens of wounded men to safety, the crew shot in Goulburn. The production earmarked a plateau for the battlefield, but had to change it to a nearby farm at the last moment when local authorities objected to the crew shooting in Goulburn.

“We needed a 360-degree view and we had 270 because one corner wasn’t great, but we worked around that,” says Mechanic. “Then environmentalists blocked us from cutting down half the trees we were supposed to cut, so we ended up with 180 degrees and had to keep resculpting the battlefield. The fact you can’t see it in the movie is a testament to the production design and to Mel, who wasn’t happy about it but was undaunted and kept looking for solutions.”

With the weaponry was authentic to the period, the film’s re-recording mixer and longtime Gibson collaborator Kevin O’Connell, explains that the sounds were embellished to make them richer.“Any time you’re working on a Mel film, they’re sonically challenging,” he says. “His movies are usually fairly intense.”Gibson would assist the action by screaming through a megaphone.

The film has been nominated for six Oscars including Best Film and Best Director and the AFI and National Board of Review have listed it as one of their top films of 2016. At time of writing the worldwide box office stands $174m and will make even more especially if it wins.