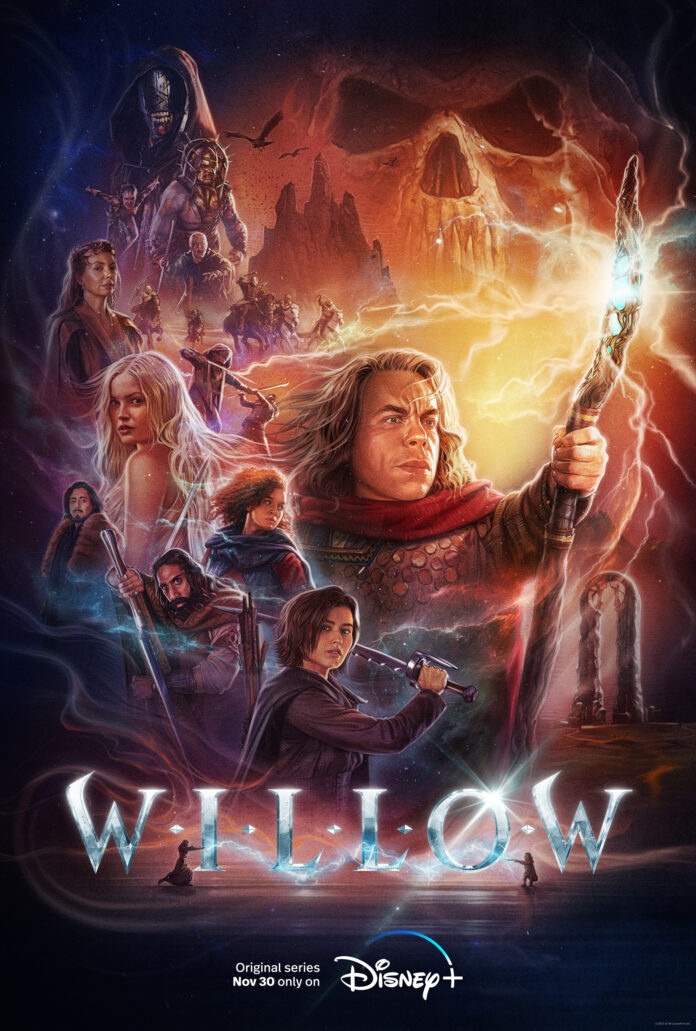 With the original Star Wars trilogy over and done George Lucas attempted to start another mythical fantasy with Willow a story that featured former ewok Warwick Davis as a young farmer chosen to undertake a perilous journey to protect a special baby from an evil queen. The film made $57m at the box office – not Star Wars type earnings but enough to secure a firm fan base that has grown over the years enough to demand a sequel. Though it’s not a stand alone film we now have a 6 part Willow TV series with Warwick Davis reprising his role as Willow Ufgood.

Now, the story oicks up twenty years later with Davis reprising his titular role as he leads an unlikely crew of heroes on a quest to protect Andowyne from an even larger foe than they had imagined possible. With the first episode something of a scene setter which sees Joanne Whalley return as Sorsha and introduces new characters with her two children Kit (Ruby Cruz) a head strong woman and him-bo son Aryk. They are all acting as temporary strand ins for Elora Danan who nobody has seen for years and may no longer even be alive but should she return will reclaim her throne.

But when their castle is under siege and Aryk is taken it is his sister Kit along with her friend Jade (Erin Kellyman) and later joined by Dove (Ellie Bamber ) Aryk’s girlfriend that sees them go on a quest across the kingdom but needing the help of Willow who still aspires to be the wizard he believes he should be.

A surprise visit from Kake Gyllenhaal at the Strange World premiere

The first episode like any is a bit of a scene setter with the introduction of the characters (and there are a lot of characters) but the series really gets going with the second episode where the team are pursued as they go on their quest. Though Willow is front and centre this is far more female centric and they are given great support by Amar Chandha-Patel and Tony Revolri in star making roles as written by show runner Jonathan Kasdan. This TV series, unlike the film, is lighter in tone that plays to Warwick Davis strength as a comic actor as demonstrated so brilliantly in the Ricky Gervais penned series ‘Life’s too Short’ and he handles the comedy here with panache.

With nods to Lord of the Rings the landscapes are stunning ( it was shot in Wales) and the myth expands with several decent twists and surprises which will please fans. There’s enough going on as the series progresses to draw audiences in and Fans of the film will quickly warm  to the series

Warwick Davies, Jonathan Kasdan and the cast introduce the series premiere to a  London audience……

Willow is streaming on Disney+ from 30th November 2022