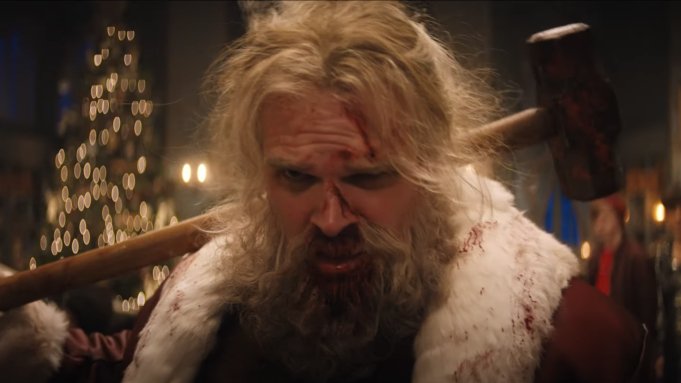 Producer David Leitch whose films as director include the recent Brad Pitt starrer ‘Bullet Train’ as well as Charlize Theron in ‘Atomic Blonde’ is well versed in kick ass action and had worked as a stunt man previously with director Tommy Wirkola on the 2013 film, ‘Hansel & Gretel: Witch Hunters’. David sent the screenplay for Violent Night to Wirkola back in summer 2021 and asked if he wanted to direct it.  Telling him the script was like Die Hard with Santa Claus! And in the film David Barbour plays Santa in ball breaking style but with an interesting backstory.

“Santa was a greedy, violent Norwegian Viking who travelled the Scandinavian countries in search of treasure, killing anyone who got in his way,” Wirkola says. “One day, he heard a rumour about a legendary treasure way up North, so he spent months traveling as far north as he could go and, of course, the treasure wasn’t what he expected. It was the elves and the magic of Christmas that he discovered. This was the moment that he was offered some redemption and he found that in giving back, he could redeem who he was born to be, rather than a violent murderer. So, when we meet him in the film, he hasn’t thought about that life or been close to that life for hundreds of years, but over the course of the events of the film, he’s forced to put some of his skills from the past into practice.”

Top Ten Christmas movies but always for the right reasons

So in Violent Night all manner of unholy carnage is unleashed when a group of mercenaries attack the estate of a wealthy family leaving Santa to step in and save the day and Christmas too!

Here’s a few fascinating facts about the making of Violent Night…..