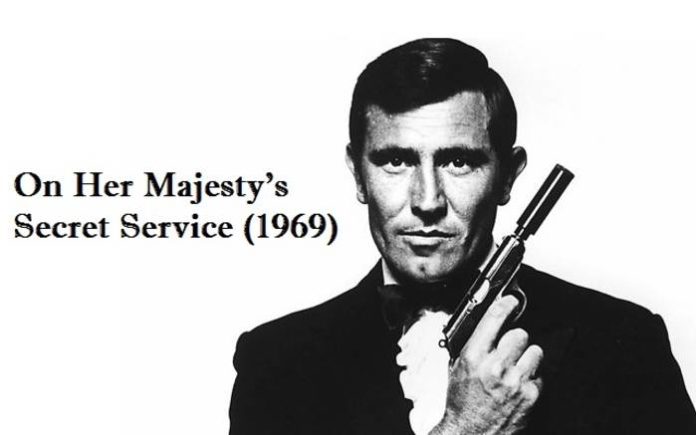 So with Bond 25 about to start filming we thought we’d do the next in our best Bond film by actor and having started with Sean Connery here next to play the role was George Lazenby. Now this will not be a long list as he only made one film, 1969’s On Her Majesty’s Secret Service.

At 29 Lazenby has been the youngest actor to play Bond (Connery was 31). Like Connery he had had a wide variety of jobs and as far as acting went he had only appeared in TV commercials. A chance meeting with producer Cubby Broccoli and then spending money on a suit, Rolex watch and haircut like Connery got him an interview with the film makers and a screen test fight persuaded Broccoli to cast him. Not a bad start for someone with no real acting experience but it would be unfair to berate him as the film is unjustly slighted by fans and is one of the better early Bond films with its story of the super spy going after Blofeld in his mountain top hideaway, a stunning bit of design that would influence a major sequence in Christopher Nolan’s Inception.  Blofeld’s HQ in On Her Majesty’s Secret Service was actually a partially built restaurant accessible only by cable car and production had to build a helicopter pad there too.

It was a typically Bond film with a plethora of beautiful women and a first for Bond in that he marries Diana Rigg which typically ends tragically played out by one of the best Bond themes ever, Louis Armstrong’s ‘We have all the time in the world’, probably as near as a Bond film ever got to drawing a tear from its audience.  It was however the first Bond film to have Bond shed tears. On Her Majesty’s Secret Service has a number of other firsts some not always fitting with the franchise notably Lazenby turning to camera saying, ‘This never happened to the other fella’.

On Her Majesty’s Secret Service  has some great set pieces  – Bond sliding along the ice firing a machine gun, one of the first film appearances of Joanna Lumley, great ski stunts, an impressive avalanche, an array of great cars and  Telly Savalas as Blofeld was pretty good in the role too.

At 142 minutes it was the longest Bond film and contrary to opinion it was not a flop earning $22m in the US alone and was one of the biggest earners of the year. Unfortunately for Lazenby the press were out for him from the start constantly comparing him to Connery (the fate of every actor who plays the role). Lazenby hardly made it easy for himself either with Broccoli growing increasingly irked by the actors arrogance on set when the actor skied on the slopes and broke his arm. It was rumoured that he and Rigg didn’t see eye to eye though this is disputed by the director Peter Hunt. The producers also heard that Lazenby had spoken to his agent about his reticence to repeat the role due to the constraints of the contract and feeling that the suave suited spy was out of kilter in the late sixties era of free love. He hardly endeared himself to the producers when he turned up to the premiere sprouting long hair,  beard and looking anything but slick. But that doesn’t take away from what was a decent film and though  On Her Majesty’s Secret Service is one of the Bond films that’s not often repeated on TV it’s unduly under rated and well worth a watch.