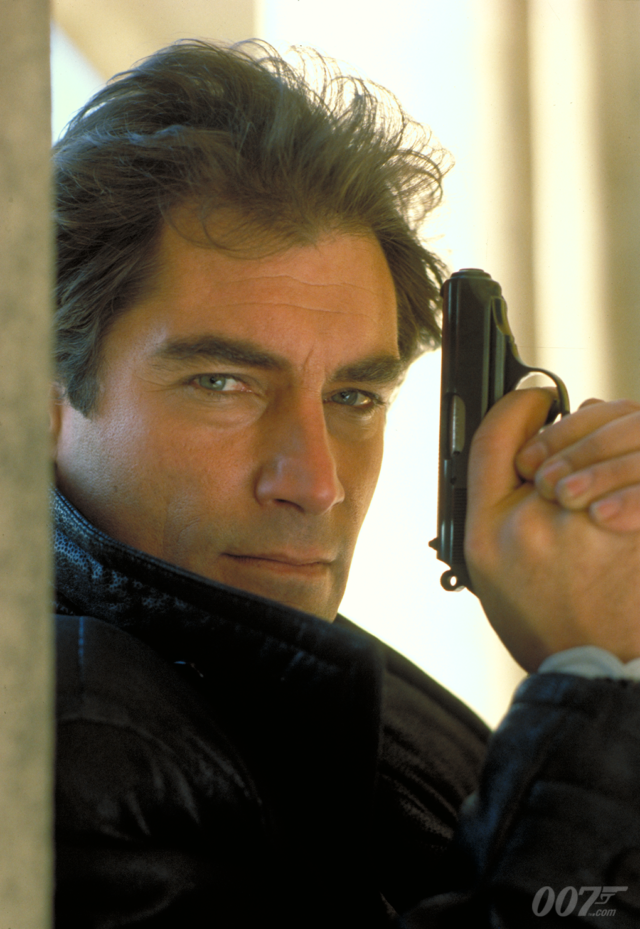 The latest in our series of best Bond films by the actors who’ve played the role continue with Timothy Dalton, the fourth actor to play the superspy……..

Roger Moore had retired and the turnaround to find the next Bond had been quick with Timothy Dalton, a Welsh born classically trained Shakespearean actor taking up the licence to kill after Pierce Brosnan was unable to exit his Remington Steele TV series contract. The Living Daylight saw Bond return to Cold War shenanigans as befitting a film from the mid Eighties and here he is sent to investigate a KBG policy to kill all enemy spies in the curse uncovering a major arms deal that will impact on the entire world. Directed by John Glen for the fourth consecutive Bond film it has a decent cast with Jerome Krabbe as a slippery Russian defector, Joe Don Baker as a mad military General, Art Malik as an Afghan militia leader (a sort of prep role for his mental terrorist in ‘True Lies’) and Maryam D’Abo was the Bond girl who didn’t look entirely comfortable in the role along with Desmond Llewellyn reprising his beloved role as Q.  The break from the old was the recasting of Miss Moneypenny with Caroline Bliss taking over from Lois Maxwell. The Living Daylights had its moments perhaps the most quirky being a psychotic lunatic Russian assassin disguised as a milkman laying waste to a country house being used as a safe house.  There was also a decent climatic sequence set on a huge military plane with Bond and baddies doing their best to stay inside rather than fall out of the back of it miles above Afghanistan. With a theme tune by A-ha it also had a proposed theme tune by The Pretenders that peppers the sound track and frankly was better than A-Ha’s. At well over 2 hours it was perhaps a little too long but the film performed adequately worldwide.

So with a choice of only two Dalton Bond films we’ve elected Licence to Kill as his best. The Producers didn’t wait around before going into production with the next film which was released two years later on 1989. The decision was made that this next film was to be a harder edged Bond it was also going to be more costlier and for the first time a Bond film would not be shot in its spiritual home at Pinewood Studios. The story had been considered to be China based but when this was not possible it was relocated to Mexico and the studio there.  The story followed the capture of a vicious drug lord just before Bond becomes best man at his friend Felix Leiter’s wedding only for the drug cartel to murder his wife and leave Leiter for dead. It’s then that Bond goes on the proverbial roaring rampage of revenge with M suspending Bond with his licence revoked. A great title for the film it was too until research found that apparently Americans would not understand what it meant and so Licence to Kill became the new title. The film had great locations in Mexico notably a huge building and complex that had been gifted by  a departing president to a local people who knew nothing about it, never used it and few knew it had even been built. The film also found itself shooting a great climatic sequence with duelling transporter trucks on a road that the crew would  later find was notorious for unexplained accidents and the production personnel encountered apparitions in the crew compound, the trucks starting of their own accord and at point one an explosion taken by the publicity photographer found a ‘hand of God’ reaching out from the fireball that could not be found on the film footage that was shot. It spooked the crew and they grew increasingly reluctant to shoot at the location, glad to leave when the scenes were completed. Robert Davi was a suitably gritty bad guy with a young Benecio del Doro as his murderous henchman and Carey Lowell and Talisa Soto bring in the glamour. Licence to Kill had a number of brutal moments that were not usual for the fantasy of a Bond film that included people fed to sharks, falling through industrial grinders and perhaps the moment that made the censors sit up, an exploding head in a compression chamber. It was little surprise then that for the first time a Bond film earned itself a 15 certificate rather than its usual PG / 12. The film did well making $156m worldwide placing it as the 11th biggest film that year in a year that saw it beaten by The Little Mermaid. But it didn’t perform as expected in the US. Time has favoured the film and it was director John Glen’s last Bond. After this the producers found themselves in fighting an number of negotiations and the unexpected dip in US popularity took them back to the drawing board for years with Dalton not waiting around for this third contractual film eventually bowing out and it would be six years before another Bond film was made.