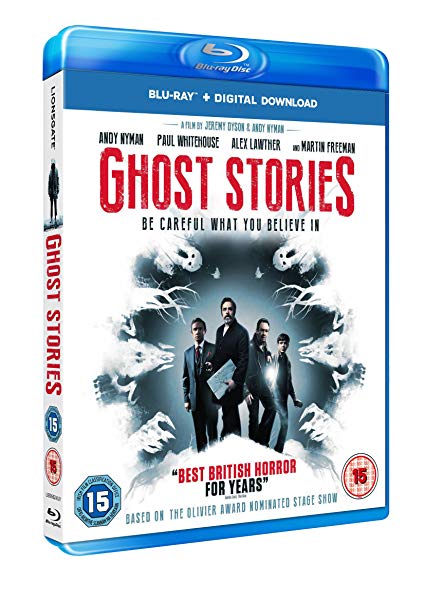 The Ghost Stories dvd written by Andy Nyman & Jeremy Dyson originally started off as a theatre production playing to much success in London’s West End before the pair adapted it for the screen. It’s a film of three seemingly unrelated ghost stories being investigated by a psychic debunker. Those three stories are of a nightwatchmen (Paul Whitehouse) checking out a strange noise, a student (Alex Lawther) utterly traumatized after his car breaks down in the woods at night and a wealthy arrogant business man (Martin Freeman) awaiting the birth of his first child in an empty house.

Dyson and Nyman have been friends since their childhood having bonded over their love of late night horror double bills on BBC2 back in the late seventies / early eighties and the Ghost Stories dvd is a loving ode to those, at times, hackneyed films notably the portmanteau films which Amicus Studios excelled. Dyson is one of the writers behind the League of Gentlemen, itself no stranger to dark and twisted humour, which is present here.  Having written the film they have also co-directed it with Nyman taking the lead role and it’s an ambitious undertaking but the film is absolutely jam packed with detail with nearly every scene, every shot even, packed with detail that is relevant as the film builds to its climax. It makes Ghost Stories eminently rewatchable and enables audiences to pick up on clues they might have missed as to where this is all going.

The first two stories are perhaps the creepiest and both Whitehouse who is proving to be as brilliant a straight actor as he is a comic and is matched by Lawther’s gibbering nervous wreck of a performance and we mean that in a good way.

Released on both formats it’s the blu ray that has more extras which includes an audio commentary with the writer/ directors and is informative with their enthusiasm for their subject film obvious. There’s also a Making of which is adequate but doesn’t really go much into the actual making but its brief look at the recoding of the soundtrack is repeated and slightly expanded on in the ’recording of Goodman’s theme’. There’s also a piece with Freeman, Lawler and the two writers doing a Rorschach test where Freeman seems bored, Lawler plays along but the directors collapse into increasingly tear filled bouts of uncontrollable laughter as they make fun of the pictures they are shown. Best of all though is a featurette called ‘the brain sees what it wants to see’ which has before and after scenes where having spent hundreds of hours watching the scenes being edited both directors missed errors in three shots which had to be digitally corrected and it gives you the chance to see if you can spot the errors in each scene too. It’s in keeping with the films advertising logo ‘Ghost Storeis: The Brian Sees What it Wants to See – which had several people complaining about a the poster having spelling mistakes not realizing they were intentional.